He asked the crowd what seat they would like him to go for and the majority said senator. 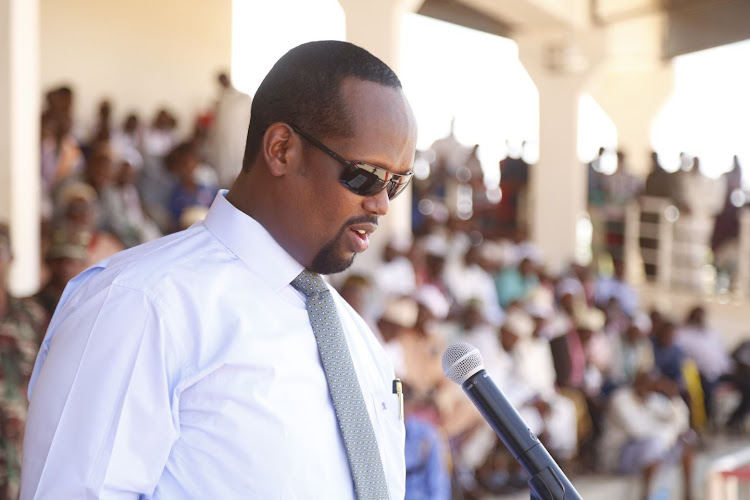 Mandera Governor Ali Roba on Sunday gave the clearest indication that he will be going for the senatorial seat after his 10-year term as governor expires next year.

This is the first time Roba is coming out to speak on the issue after months of speculation.

Speaking at Moi stadium in Mandera town when he presided over the  drill and marching parade by fresh village administrators, enforcement marshals and county band officers, Roba said he was still consulting residents on which seat to go for.

He asked the crowd what seat they would like him to go for and majority responded that he should go for senator.

“I have been receiving calls and messages from opinion leaders, residents and political shapers inquiring from me which seat I will be seeking after my term expires. In fact, some really want to see my name on the ballot. I want to pose this question to you, what seat  would you like me to go for?” posed Roba.

He added: “It is you who have said that I go for the Senate seat, not me. Maybe the reason why  you want me to go to the Senate is to defend devolution as I also lobby for more resources. Well, those are discussions that are still ongoing and with time I will make it known publicly”.

In 2017, Roba defied calls by the powerful Garre council of elders to  step down in favour of Hasan Noor who was the choice of the elders. He went on to contest and win in tightly contested election.

At the time Roba had said that he would contest and leave it to the residents to decide the person they want as their governor.

Roba urged residents to maintain peace and welcome all candidates in their constituencies and wards to sell their agenda without disrupting unity.

He said as the county chief, he will continue working closely with the security apparatus to ensure that peace and security prevail before, during and after elections.

“The electioneering period is around the corner. As we can see, candidates have started warming up and crisscrossing asking for votes. I want to appeal to the residents of our great county to maintain peace and security. Candidates who are hate mongers and who thrive on divisive politics are not welcome here. Let us give each and every individual who is seeking votes time to explain him or herself. The choice of who to vote for is yours as an individual,” Roba said.