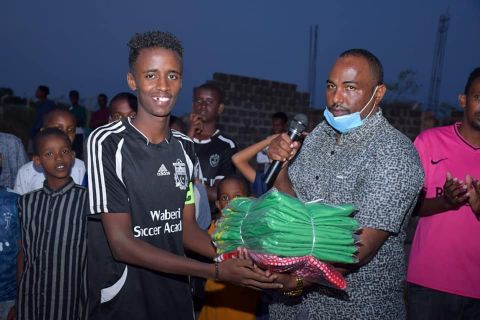 The Garissa county government has started a sports programme aimed at nurturing talent and keeping youths away from drugs and substance abuse.

County secretary Abdi Ali on Thursday said the county will roll out more sports activities to deter youths from things that distract them from their dreams.

"The aim of this contest was to not only nurture talent but also create an avenue to keep youth busy and create awareness on substance abuse,” Ali said.

The county secretary called on players and fans to uphold the highest standards of discipline, so that the ultimate mission of the competition is realised.

He reiterated that the county government would continue to invest and support youths pursuing their sporting talents.

The two teams were awarded with new balls, brand new kits as well as cash prizes. They are also set to meet the governor.

The region has been used as a drug transit area from neighbouring Ethiopia and Somalia.

More than one tonne of bhang was intercepted in the county last year.

A multi-agency security team has vowed to root out traffickers before residents are addicted.

National government administration officers have been in the fore front in the fight against drug abuse and trafficking.

Speaking at a past event, Northeastern regional commissioner Nicodemus Ndalana said the government will take firm actions against drug traffickers and dealers of contraband goods rampant in the region.