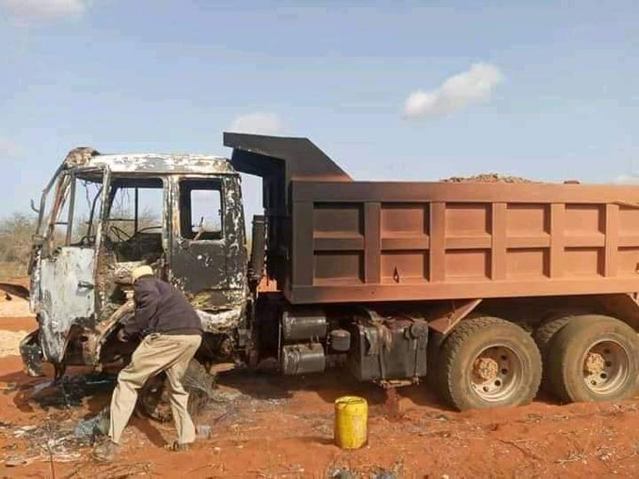 At least three people were Monday killed in an attack by Al-Shabaab militants in Jabibar area, Mandera county.

The terrorists also burnt a truck in a separate incident after hijacking the crew who were constructing a road in Mandera South.

The gunmen abducted the truck driver and his turn boy working on a road in Mandera South, Mandera County in the latest attack by the militants.

They also torched the lorry before they escaped towards the Kenya-Somalia border.

In a separate incident, an attempt by the gunmen to stop a miraa van turned tragic when one of them was run over and killed by the speeding vehicle in Jabibar area.

Witnesses and police said the gang had tried to stop the vehicle but the driver sped over them killing one of them.

The driver and his turn boy stopped a few kilometres ahead and escaped on foot leaving the vehicle behind in the drama.

Police said no casualty was reported. A team was pursuing the two crew who were abducted after the attack on the road.

North Eastern police boss Rono Bunei said more personnel had joined in the hunt on the gang that is operating in the area and harassing motorists.

“Locals can help us tame this trend. We urge them to help us in dealing with the menace,” he said.

This comes in the wake of concerns the persistent attacks are grounding operations in the region. 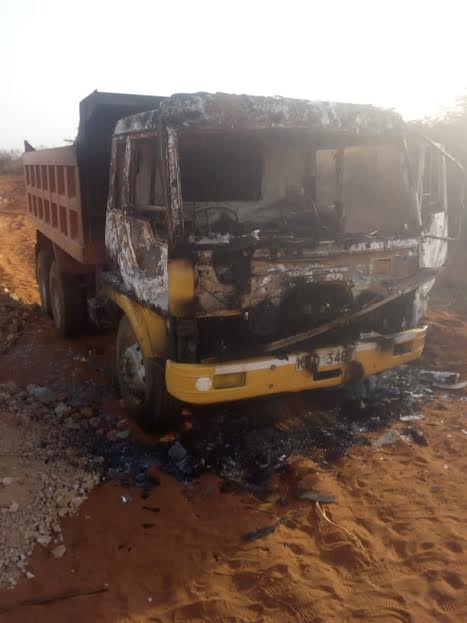 Lorry that was torched after driver and his turn boy working on a road in Mandera South, Mandera County were abducted on June 21,2021
Image: Handout

Two weeks ago, officials at the Mandera County Government stopped the movement of their vehicles over increasing terror-related incidents in the area.

At least four attacks have happened in the last two weeks in the area and left at least six people dead and 15 others injured.

The attacks have been linked to both Al-Shabaab terror group and local inter-clan fights over boundary issues.

There are fears of more attacks after locals reported sighting more gunmen roaming in separate places while planning to strike.

Mandera County Secretary Abdinur Hussein released a memo on June 10 and explained strict regulations to be followed in the movements of their vehicles.

“As you are aware, the current prevailing security situation is very volatile and we, therefore, have to exercise extra caution on the movement of our official motor vehicles.”

“To this end, you are advised to strictly observe the laid down regulations as concerns movement of county motor vehicles,” he said.

He told the county executive committee members to take full responsibility for the vehicles under their care by ensuring no vehicle is on the road past 5 pm on any weekday.

Hussein said until further notice no vehicle will be authorized to travel to the sub-counties unless on emergency missions such as ambulances, health utility vehicles or Covid-19 pandemic responses, firefighting trucks, skip loaders and sanitation trucks.

On June 9, at least three people were killed when a Kenya Wildlife Service vehicle was hit by an Improvised Explosive Device in Qoqay area, Takaba.

The bomb is believed to have been set up by militants operating in the area with impunity. The attackers torched the vehicle that had the victims after they had shot at the survivors as they escaped.

The gang also torched a police vehicle after the ambush in Banisa, Mandera County. Officials believe the attack was staged by local militia who have an agenda.

At least seven police officers and 11 civilians were injured in the attack.

On the same day, another gang shot into a police camp in Kutulo, Wajir in what is believed to be a recce mission.

The area of the attack, which is northern part of the county has been a safe area since 2013 but has lately been a soft target.

The border region has borne the brunt of repeated attacks from the militants who are at times aided by locals. The area is near the Somalia border and the militants usually cross at will and stage attacks before escaping back.

Al-Shabaab insurgents have been attacking places in the region especially in Mandera and Garissa after breaching security zones, which left dozens of civilians and security officials dead or wounded.