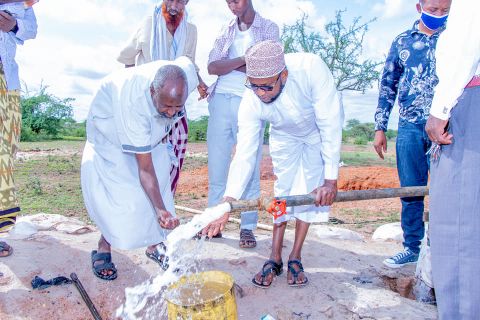 Garissa county has started drilling boreholes to end the perennial water shortage in the area.

Omar however expressed concern over the mismanagement of boreholes by the water users committees, saying the neglect eventually destroyed the water infrastructure.

“We began drilling this borehole after a breakdown of another in this area. The equipment in the earlier borehole suffered irreparable damage, triggering water shortage in this area hence forcing the government to put up a new one,” Omar said.

“The damage was as a result of negligence on the part of the water users committee. We are urging these committee members to be more responsible because by mismanaging these boreholes is putting the lives of residents at risk especially during dry spell,” he added.

The CEC urged the residents to use the boreholes with care and report any damage early enough for repair.

He said  the county government would hand over the project once it was completed. The boreholes will serve both humans and livestock.

Omar hinted at training of the water management committees, noting that there was a need for prudent management where minor technical problems and maintenance would be fixed using levies collected without paralysing water operations.

Last month while on a tour in Balambala subcounty, Omar announced that the county government, in partnership with non-state actors, has sunk 86 boreholes in the six subcounties as mitigation measures against drought.

Omar said depending on the need, more boreholes would be drilled to cater to rising demands but also appealed for assistance from other well-wishers.

“As a county, we are doing all that is humanly possible to ensure we save the lives of our people and their livestock. We are, however, calling on the national government and other development partners to provide support because alone, we cannot manage,” he said.

Last week, Governor Ali Korane regretted that the drought had become a cyclic problem. He said his administration was committed to ensuring livestock farmers incur minimum losses by providing them with water and feed.

“In places where we don’t have boreholes, our teams will be on the ground to do water trucking because we all know that water is life and without it, the consequences are dire. But even as we do this, we continue to appeal for assistance,” Korane said.