Two arrested with Sh12m worth of bhang in Wajir 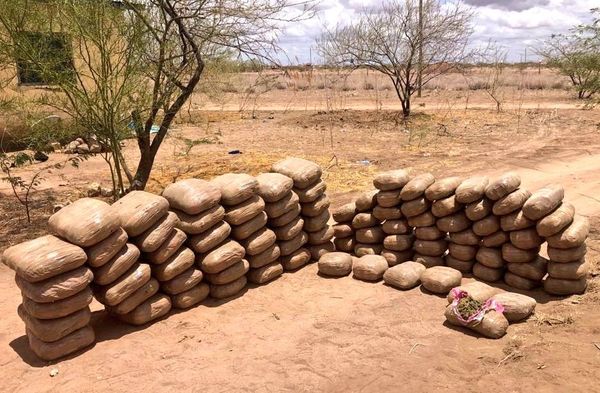 Two suspects were at the weekend arrested for trafficking 465kgs of bhang worth Sh12 million on a lorry that had delivered bags of cement in Wajir town.

Police said the men were arrested after a lorry they were using to ferry 93 bales of bhang was intercepted in Hadado, Wajir county.

They had used a lorry branded with Bamburi Cement products, as a concealment measure to traffic the hard drug to an unknown destination.

Police officers manning Lolkuta area became suspicious of the cargo being ferried through the route, triggering a search that saw 465kgs of the bhang seized.

It is believed the narcotics originated from the Ethiopian border but the traffickers used the longer route towards Wajir in bid to reach the end users are in Nairobi and other upcountry towns.

Security officials have shifted their focus to the Kenya-Ethiopia border following increased cases of bhang trafficking that originate there and end up in Nairobi.

Apart from Nairobi, security officials say the narcotics are distributed to other major urban areas where demand is huge.

The latest seizure was made on March 17 when 561kg of the narcotics valued at more than Sh14 million was intercepted in Arapal area of Marsabit county.

The narcotics were destined for Nairobi when a multi agency team managed to intercept a water bowser that was being used to ferry the haul.

The consignment of drugs was concealed within a water bowser. Upon realising that he was cornered, the driver of the lorry jumped and escaped during the operation.

The owner of the consignment was later arrested in Nairobi’s Githurai area and was expected to be arraigned.

The Director of Criminal Investigations George Kinoti said they have put in measures to contain the trafficking menace.

“We used to have such a trend from the Kenya-Tanzania border in Isebania but now they have shifted to Ethiopia. We will focus on them to tame it,” he said.

He added the seizure of the 561kg was made possible through collaboration among various stakeholders.

Security officials say most of the bhang seized in the region originates from Ethiopia. Moyale town, the largest of the trading centres, stands out as the capital of contraband that includes smuggling of Kenya’s popular variety of bhang.

Apart from Moyale, other border points used by the crooks to smuggle in Ethiopian bhang include Sololo, Uran, Forolle and Dukana.

Police say dealers use peddlers to bring the bhang into Kenya in small batches using unofficial or unpatrolled routes especially at night to these centres, with Moyale town accounting for more than 75 per cent.

Light vehicles, boda bodas, donkey carts and couriers are also used to sneak in the cargo undetected along the border. It’s from these centres that the bhang is transported all the way to Nairobi using two different routes which include the direct Moyale-Nairobi highway via Marsabit town and Isiolo and the unofficial route, a cutline that runs from Funannyata in Sololo to Yamicha plains of Merti sub-county in Isiolo.

Last November, two people were arrested with Sh1.5 million worth of bhang in a Toyota Prado in Isiolo town and charged in an Isiolo court.

Five other people among them a police constable and a sergeant based in Mariera camp in Igembe Central, Meru county were arrested with 600kg of bhang worth Sh15 million by multi-sectoral security team including the army based in Archers Post.

The haul was in a GSU Land Cruiser pick up and a private Toyota Prado. Days later a vehicle that managed to pass through several roadblocks in parts in upper eastern including Meru (Igembe Central and Tigania East) was seized in Makuyu, Muran’ga county with bhang with a street value of Sh14.5 million.

A Moyale trader with a fake identity card of Isiolo county government posing as a nurse and a driver from Isiolo were arrested with the haul and are being probed by anti-narcotics officers in Nairobi the trend.