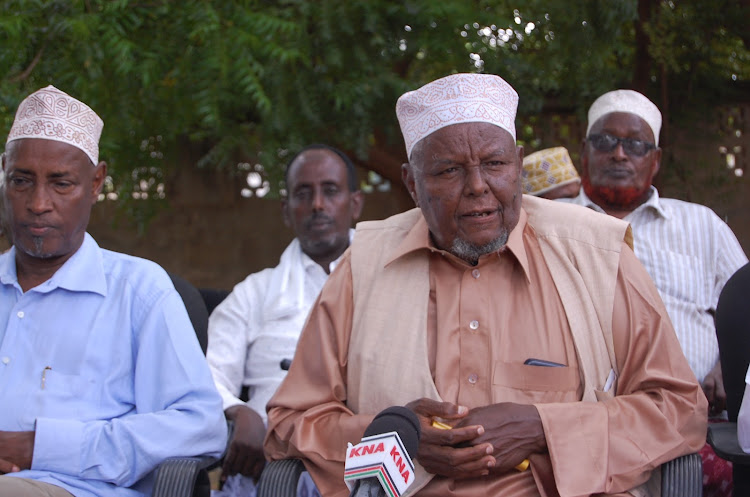 Muslim leaders on Sunday condemned Garissa religious elders who last week distanced themselves from the position taken by the  Supreme Council of Kenya Muslims on the BBI.

Naado said although the handshake that gave birth to the BBI task force had quelled political anxiety, the recommendations still have huge gaps which the same team cannot fix.

But addressing the press in Garissa a day later, Muslim elders, led by Kenya Livestock Marketing Council chairman Dubat Amey, said the task force was best placed to steer the BBI debate to the next level.

Dubat who read the statement on behalf of his colleagues said Supkem did not speak for all Muslims and that their views were personal.

They said having a new team as suggested by Supkem would be counterproductive, as it would amount to starting the process afresh.

And on Friday, in a statement sent newsrooms and signed by Supkem acting  national chairman, national youth leader,national regional coordinator Coast and the  regional chairman Kwale, they termed the statement given by the elders in Garissa is a misrepresentation of facts and very unfortunate.

“The main purpose of the released statement is to condemn the Garissa religious elders for opposing our national chairman for giving his views on the BBI report as a Muslim leader and not individual. The statement given by the elders in Garissa is a misrepresentation of the facts and very unfortunate,” the statement said.

It added: “Firstly, why direct their attack on an individual while the press statement was views of various organizations namely Supkem, Namlef, Jamia mosque Nairobi and CIPK?

"Secondly,  all Muslims were also given a chance as other Kenyans to give their views on the BBI report as this is their constitutional right, so what is the problem with the national chairman giving his views as an umbrella body of all Muslims?”

Supkem national organizing secretary Abdullahi Salat comes from Garissa and he also gave his statement against Raila Odinga and President Uhuru Kenyatta on the BBI report but no comment was made against his statement. "Is this racism or tribalism? Or does it mean that there are those who are special than others?” the leaders said.

The extension of the BBI task force's mandate has elicited mixed reactions among leaders, especially the political class and clerics. While some have supported the decision, others have called for the inclusion of law experts and the youth to ensure a comprehensive output.

Last week, ACK Archbishop Jackson ole Sapit expressed his reservations on the extension and instead called for fresh minds devoid of political affiliation to steer the report to the next level.

He said the President should have listened to Kenyans and included the youth who have fresh minds and are the future of Kenya, but not the handshake team.