• She spoke when she officiated the opening of a workshop on enhancing community/ security cooperation on countering violent extremism.

• She said her office will organise football tournaments and other games across the constituency to avoid idleness and identify talents. 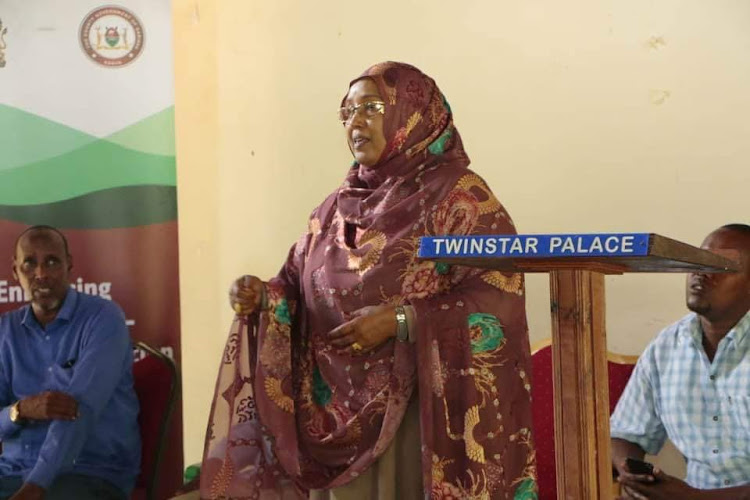 TAKE CARE OF YOUR KIDS: Ijara MP Sophia Abdi in Masalani town on Wednesday when she officiated the opening of a workshop on enhancing community/ security cooperation on countering violent extremism
Image: STEPHEN ASTARIKO

Watch over your children during this December holiday lest they find themselves in bad company, Ijara MP Sophia Abdi has told parents.

Speaking in Masalani town on Wednesday, Abdi said the long holiday comes with many challenges parents must deal with.

“I am speaking first as a parent who understands how it can be tricky to handle children, especially if you are not used to having them around with you for such a long period. It is during such time that some of them find themselves in bad company, whose sole intention is to ruin them,” she said.

She spoke when she officiated the opening of a workshop on enhancing community/ security cooperation on countering violent extremism.

Abdi said the situation is made worse for parents in Northeastern by the risk of radicalisation by terror groups.

“Fellow parents, let us play our role of parenting as expected and required of us by God. Let us inculcate good morals and instill discipline in them so that they grow up to be good citizens,” she said.

She said her office will organise football tournaments and other games across the constituency to avoid idleness and identify talents.

She commended the security personnel for their proactive approach in the fight against terror.

Parts of her constituency such as Holugho, Ijara and Sangailu have in the past bore the brunt of al Shabaab attacks, and police have been killed through IED attacks.  Communication masts have also been destroyed.

“I want to express my unwavering support in eradicating this menace from our society and country at large.. We must all remain focused and united and hare relevant and actionable information to the security apparatus whenever we have them so that they act,” Abdi said.

The workshop conducted courtesy of  Road International in conjunction with USAid's NIWETU Programme is aimed at educating the community and security agencies on the need to develop a unified front in the fight against terrorism.