• Dismisses critics saying it is meant to alienate pastoralists 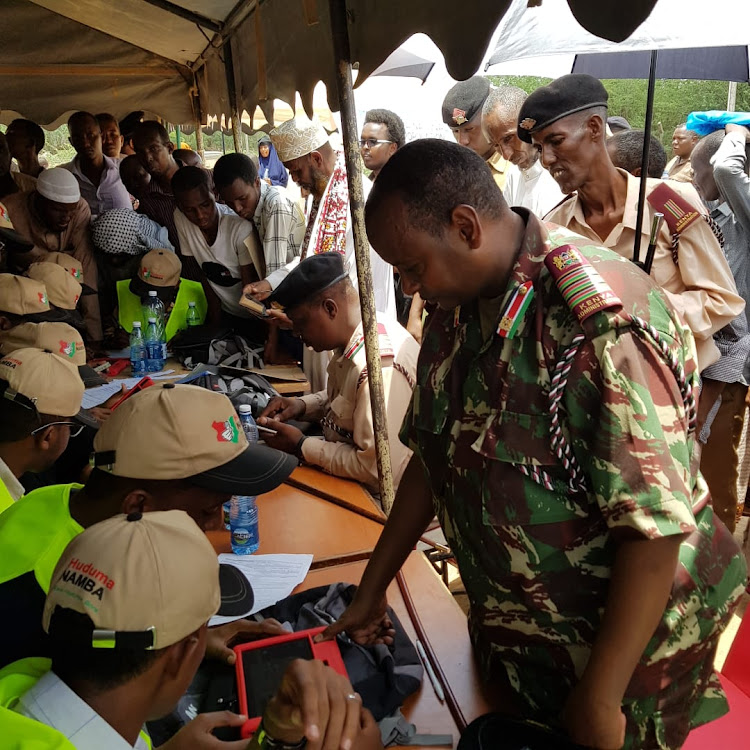 Speaking in Habaswein subcounty in Wajir South on inspection, B, Birik said a lot of rumours are being peddled to scuttle the biometric registration.

Critics say it is meant to alienate pastoralists. As a result, the turnout in most parts of the region has not been good. The drought also has forced pastoralists to be on the move in search of water and pasture away from registration centres.

Birik instead urged the public to take the lead role and turn out in large numbers.

“I appeal to everyone including politicians to support this exercise because it is good for our country. Administrators including chiefs and their assistants should ensure their localities get registered,” Birik said.

The exercise is meant to integrate and harmonise the national registration database. It is also meant to register all citizens and foreigners in the country.

Birik said the exercise will facilitate implementation of the Big Four agenda and enhance the national security by capturing accurate information on all Kenyans.

On Friday last week, governors from the ASAL counties faulted the government for lack of civic education.

Speaking in Lodwar town after a Frontier Counties Development Council summit, governors warned that the exercise as designed would lock out a majority of residents in ASAL counties.

Led by FCDC chairman and Mandera Governor Ali Roba, the governors said lack of awareness and a short registration period would inconvenience communities who are largely pastoralists.

They insisted these communities have little knowledge about the registration.

A court has said registration is not mandatory, giving DNA is not mandatory and no one is to be denied services if they do not have a Huduma Namba. A hearing will be held in late April.

"A matter of such grave importance should not have taken place without massive civic education at all levels, and we ask the national government to release adequate resources for civic education, Roba said.

Garissa Governor Ali Korane said it was wrong for the national government officials to come up with policies that couldn't work in some parts of the country.

He cited the requirement that applicants produce an ID card, birth certificate, NSSF and KRA PIN, saying many people in Garissa didn't have such documents.

Korane cited some wards where as many s  80 per cent of the adult residents did not have birth certificates or KRA PIN numbers.