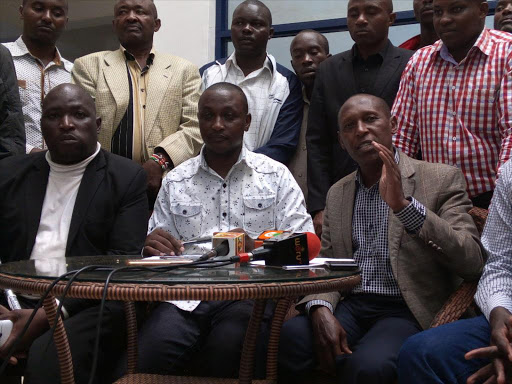 Fifty-two independent candidates in Meru seeking governor, senator and legislative seats as MPs and MCAs have formed a caucus to support each other ahead of the August 8 polls.
Interim chairman James Mithika, running for the Igembe Central MP seat, said they came together because they have a common goal.
“Our vision is to deliver the people from the tyranny slavery of party politics,” Mithika said.
They held a meeting at Westbuild Hotel, North Imenti, Meru county.
The group’s county coordinator, Anderson Kathendu, who is in the Senate race, said they are now a force to reckon with in Meru.
Kathendu urged residents not to elect leaders based on party, but ideologies and agenda.
“We know independent candidates are a movement in Kenya and we have now started a caucus in Meru. We are the pioneers and we are calling on all aspirants to come on board.
“We will stand on our own without depending on parties. We will deliver more seats than Jubilee Party, PNU and any other political party in Meru. People should watch this space and expect fireworks at the polls,” he said.
Meru deputy speaker Gideon Kimathi, in the battle for South Imenti MP, is the group’s secretary general. He said independent candidates will transform Meru politics.
“We have witnessed bungled party primaries in various parties. This is not new. It was witnessed in 1988 where losers were declared winners and vice versa in the Kanu nominations. This scenario was repeated in Meru,” Kimathi said.
He said the movement will traverse all counties across the country.
“Independent candidates cannot be taken for granted. We want to listen to the people. Our competitors have blessings from the parties, but we depend on the people.
“We have resolved to support each other’s network. We have to look for resources to give other candidates a run for their money,” Kimathi said.