One killed as Meru farmers clash with Borana herders 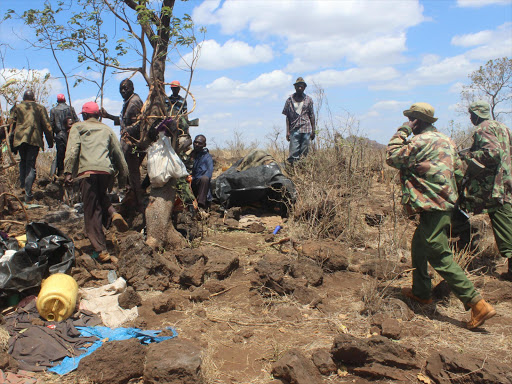 A man was shot dead and another sustained injuries when clashes erupted between Meru farmers and Borana herders on Sunday morning.

The herders and their lifestock invaded farms at Kieni Kia Ndege along the Meru-Isiolo border.

Residents fled the area, which is prone to cattle rustling. The Samburu, Meru, Borana and Turkana communities live in the area.

Resident Alex Mwiti, a neighbour of the deceased Stephen Karithi, said tension escalated because police officers did not respond in time. The delayed response caused the farmers and the armed herders to start confrontations.

“The camel herders, who are from the Borana community, have been destroying crops in this area and are very hostile. Karithi’s body spent the better part of the day lying in the sun and police responded very late in the afternoon,” Mwiti said.

Residents said very few home guards have been posted and urged Meru county commissioner Wilfred Nyagwanga and the state to improvi security or they will boycott the polls.

Nyagwanga said officers have been deployed to strengthen security and restore calm.

“There are issues the police are investigating and we are working to arrest the criminals,” he said.

Nyagwanga said there has been a lot of movemement animals during the drought and the livestock herders move in with illegal firearms.

“We want to revive security committees to ensure people move in when the chiefs and security personnel are aware so that when conflict arises, it can be solved easily.

“This is happening because of limited resources such as pasture and water. We will ensure we separate the groups and resolve theconflict,” he said.

Post a comment
WATCH: The latest videos from the Star
by Kirimi Murithi @Murithik
North Eastern
14 February 2017 - 03:00
Read The E-Paper