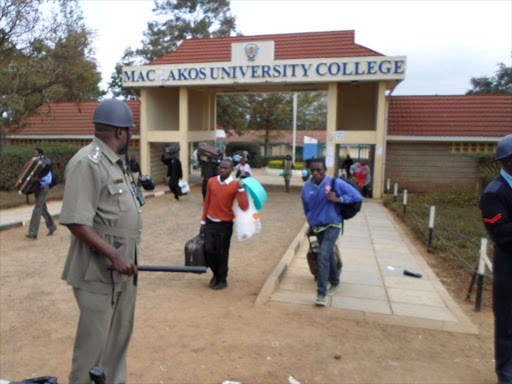 BUNGLED ELECTION: Machakos University College students leave under tight security yesterday. It was closed indefinitely on Monday after two offices and a store were torched. Students were protesting against a flawed elec-

The poll was to be re-run at the School of Education polling station yesterday but students went on a rampage first.

In a notice to students, deputy principal Prisca Tuitoek said all certificate, diploma and undergraduate students in session will go home.

Tuitoek said the re-opening will be communicated through the media and university website.

On Monday morning, the institution’s management woke up to find the dean of student’s office, the procurement office and a store torched. Vital documents were burnt.

In her media brief on Monday, Tuitoek said the fire is believed to have been started by the students.

She said they were angry about botched polls.

“Tension at the college remained high starting last week after reports went round that results from one polling station had been tampered with. The results are yet to be released,” Tuitoek said.

She said the campaigns went on well until some students demanded a fresh election, following complaints from the School of Education polling station.

“Problems began when the students demanded a repeat of the whole exercise, despite the commission and the returning officer insisting only one polling station should be repeated,” Tuitoek told journalists on Monday.

“To our shock, we woke up to find the office of the dean of students on fire at about 4am on Monday, a day before the expected repeat of the polls.”

Post a comment
WATCH: The latest videos from the Star
by ANDREW MBUVA
North Eastern
24 February 2016 - 05:00
Read The E-Paper