NOT ALL SACCOS ALIKE

B-Smart promises all will be well in three months, hurt by economy

•Shareholders claim Sacco has not been giving them loans for two years and will not give back their savings.

• They stormed the Sacco headquartres in Nairobi on Mnday. s 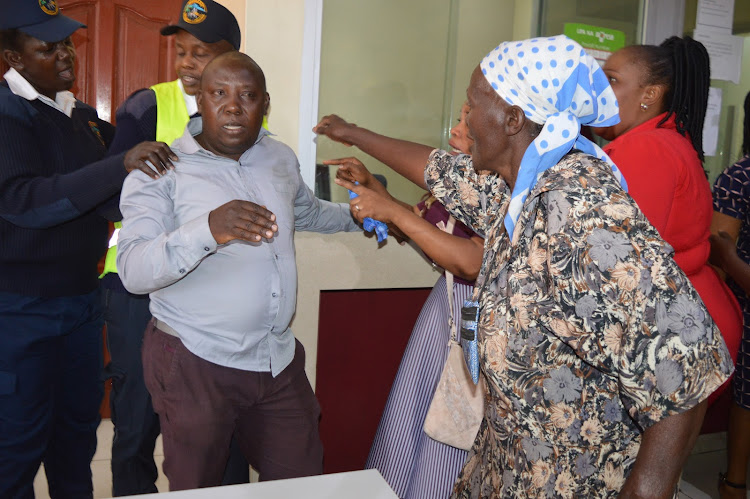 DEMANDING David Kinyua (left) an employee of B-Smart sacco limited is confronted by sacco members who demanded to be refunded back their savings
Image: STANLEY NJENGA

The shareholders of B-Smart Sacco Limited on Monday stormed the headquarters in Nairobi demanding to be refunded their savings.

The shareholders, who mostly are traders in Gikomba market, claimed the sacco has not been giving them loans in two years and had declined to give the members back their savings.

Mary Njoki, a member, said that they were being taken round once they requested to be given loans or withdraw their savings with the Sacco management failing to fulfill members financial needs.

“These people have sweet lies. Every time I come here they tell me come on Monday, other times they come on certain dates but I have never gotten any loan and I cannot withdraw my savings only taking us rounds,’ Njoki said.

Leah Wangechi, a shareholder who has deposited over Sh 1.4 million in savings, said that she has had enough of the lies of the Sacco management since she cannot withdraw her savings and had applied for a loan for almost one year. 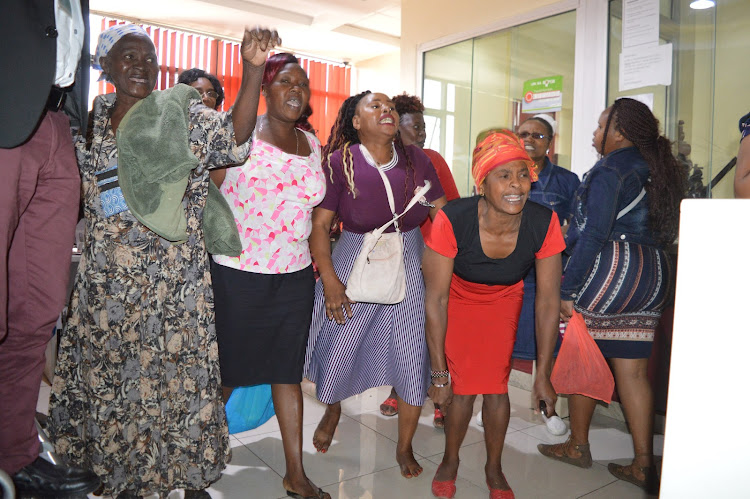 SACO PROTEST: B-Smart Sacco Limited shareholders protest inside the banking hall of the Sacco demanding to be refunded their savings.
Image: STANLEY NJENGA

“I joined the Sacco six years ago but since the beginning of last year I felt something was amiss since one could apply for a loan and the Sacco management would give stories that the C.E.O has not yet signed the loan application forms."

"Sometimes I would be told that the CEO is out and has gone to a burial for one month and I was told to wait,"Wangechi said.

Wangechi said that in Gikomba market where she operates she was able to introduce the Sacco to other traders where the traders have been blaming her for enrolling them in a bad Sacco.

“I am in trouble since I introduced many traders to the Sacco. The members cannot withdraw their savings where many lost their business through fire that broke out recently in Gikomba,” Wangechi said.

She said that she wrote a letter to the management to release her savings last year but she has been taken in rounds and the management is yet to refund her money.

David Kinyua, an employee of the sacco, said that all members who have written to the Sacco for refund will be refunded in three months.

“It is true some members have applied to be refunded back their savings. The problem we have regards to the previous years where the sacco was hard hit by Covid-19 and also the 2022 general elections and we will refund back their money and we will also give them loans,” Kinyua said.

“There was a panic withdrawal last year and everybody wanted back their money and we did not have money which we could give at demand since the Sacco had given out money in the form of loans to the members,” Kinyua said.

Kinyua said that the sacco has issues with only a few members who have applied to be refunded back their savings and the Sasso promised that in three months’ they will be refunded  their money.

The CEO of the sacco locked herself in the Sacco office and declined to talk to the agitated members. It took the intervention of police officers who whisked her away from the office.

The members have since reported the matter to Kamukunji police station and the matter is under investigations.

Says process will enable farmers to monitor the kilos of harvest delivered monthly and the money earned.
Counties
1 week ago

Vice chairperson says most members secured loans but are yet to receive land ownership documents.
Counties
1 month ago
Post a comment
WATCH: The latest videos from the Star
by STANLEY NJENGA Correspondent, Kiambu
Nairobi
17 January 2023 - 22:00
Read The E-Paper