•The issue of elderly and ghost workers has been haunting City Hall for long.

•As a result, the early voluntary retirement motion was moved by Umoja 1 MCA Mark Mugambi and passed. 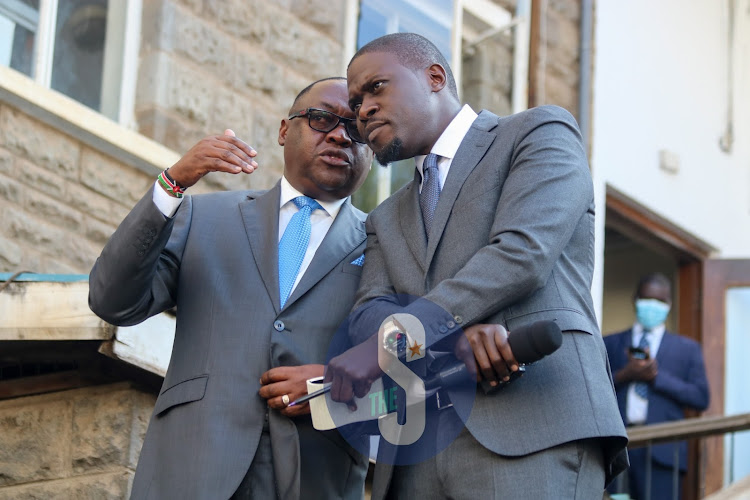 Nairobi Governor and his deputy James Muchiri at a past event at City Hall.
Image: WILFRED NYANGERESI

"We will soon introduce new staff ID cards which will have special features including a USSD query system *647#,”he said on Tuesday

The ID will also help residents identify genuine city staff to avoid being duped by imposters.

The code is used to by city resident to seek services from the county.

The issue of elderly and ghost workers has been haunting City Hall for long.

As a result, the early voluntary retirement motion was moved by Umoja 1 MCA Mark Mugambi and passed.

Mugambi argued that for the county to deliver on its mandate, it requires energetic people, who are also conversant with technology.

Mugambi said 60 per cent of the current county workforce estimated at 14,000, is between 50-60 years old. He also said that about 651 officers would be retiring.

The legislator who is also the minority whip claimed that about 25 per cent of county staff have been slowed down by ill health and alcohol addiction.

Opposing the move Festus Ngari, the secretary general of the Nairobi branch of the Kenya County Government Workers Union, said the plan will disadvantage those targeted.

"This could turn out discriminative against employees who served in the previous regime," he said.

Ngari said the voluntary early retirement plan could affect about 3,000 workers and warned that the Sh100 million the county promised to allocate to the plan will not be sufficient.

The 2019 City Hall Biometric Card Registration report revealed that about a half of the county  employees are aged 50 and above with most set for retirement.

The recommended retirement age is 60.

The voluntary early retirement policy was developed in 2018 but delayed for undisclosed reasons.
Counties
1 year ago
Post a comment
WATCH: The latest videos from the Star
by MAUREEN KINYANJUI News Reporter
Nairobi
22 November 2022 - 13:57
Read The E-Paper