Sakaja is a worthy competitor, not my enemy – Igathe

If elected governor, Igathe added that he will extend a working hand to Sakaja and work with him.

• The Nairobi governorship race has been termed a battle royale between  Senator Sakaja and Igathe.

• Igathe added that working with the Kenya Kwanza Coalition candidate will be for the benefit of Nairobi residents. 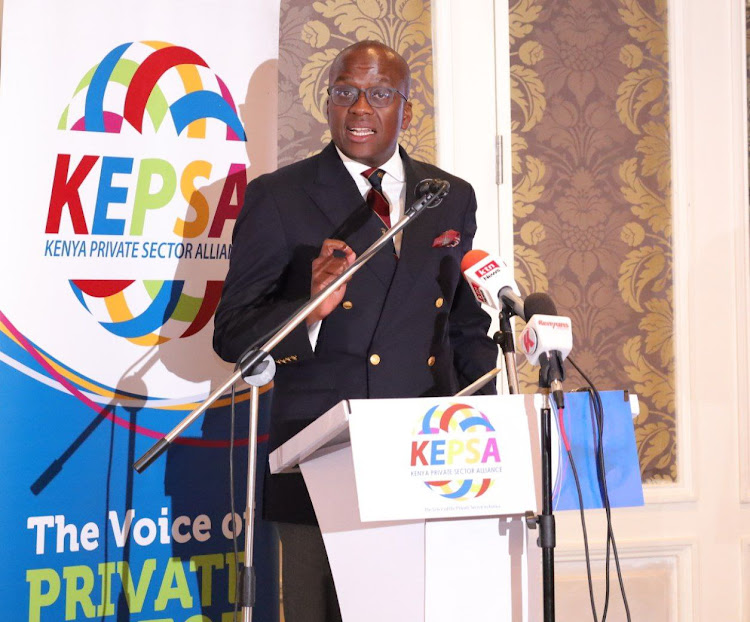 Nairobi Gubernatorial candidate Polycarp Igathe has expressed confidence in beating his main rival Johnson Sakaja on the ballot in the August polls.

Igathe noted that there are no permanent enemies in politics adding that he will extend a hand to Sakaja and work with him in developing Nairobi.

He exuded confidence that he will floor the Nairobi senator in race to become the next City hall boss.

"Johnson Sakaja is a worthy competitor, but he is not my enemy. He is a Kenyan who is putting himself up for candidature just as I have. When I win on August 10, I will work with him. I will consult him because I am beating him at 8:57 am," Igathe added.

He was speaking on Thursday when the Kenya Private Sector Alliance (KEPSA) presented him with the Private Sector Economic Manifesto for Nairobi County.

With permanent interest at heart, Igathe added that working with the Kenya Kwanza Coalition candidate will be for the benefit of Nairobi residents.

"Let’s not fight, let us continue to listen to one another and campaign in peace. We are one united indivisible country called Kenya and politics is not enmity,” he said.

The Nairobi governorship race has been termed a battle royale between  Senator Sakaja and Igathe.

Other than the two, the race has also attracted non-politicians who are eager to replace Kananu at City hall.

Tech-entrepreneur Harman Grewal is on a Safina party ticket, while Kenneth Nyamwamu of United Progressive Alliance ticket is also in the contest and has former banker and human rights activist Lilian Tina Achieng as his running mate.

Going on an independent ticket is Esther Waringa, Nancy Wambui and businesswoman Agnes Kagure who has Abel Onchari Oyieyo as her running mate.

Igathe, however, poked holes into the recent opinion polls released by TIFA that have pinned him second in the race after his competitor Senator  Sakaja.

He alleged that the polls are created by politicians to create a perception and he doesn’t waste his time reading them.

"Those polls are lies told by lying liars. I am a market researcher and it is a shame what is going on,”

"The real poll is on August 9 and they will be shocked. We shall win by over 1.2 million votes and we shall obliterate UDA," Igathe added.

"How are we going to lose to Sakaja? They must be completely out of their minds," he added.
News
2 days ago

These dramatic events led to scenarios where some people ended up being the biggest winners while others lost.
Counties
3 days ago

The Nairobi governor race could soon turn into a one-horse race with Sakaja facing disqualification.
News
1 week ago

A Nairobi voter had challenged the clearance of Igathe to contest for the seat .
News
1 week ago
WATCH: The latest videos from the Star
by MAUREEN KINYANJUI News Reporter
Nairobi
24 June 2022 - 08:03