The market will consist of a main shed with 40 shops

• This will be the country's 57th modern market constructed in the second term of President Uhuru Kenyatta's leadership.

• Some 263 stalls will be divided  into fresh produce  and clothes  and wares sections. 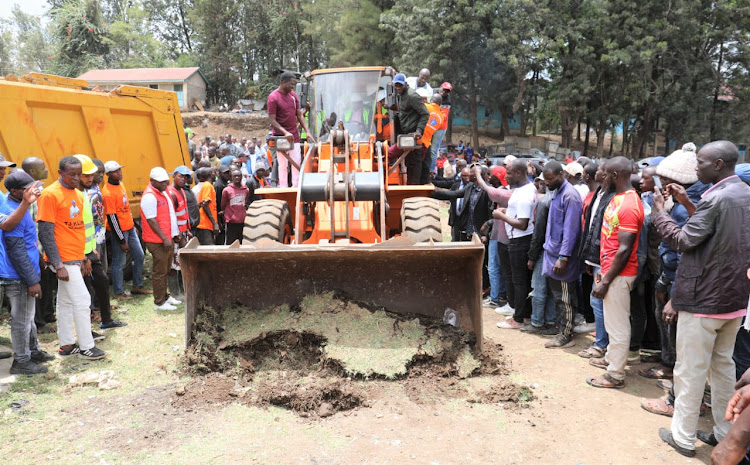 This follows the ground breaking ceremony on Thursday for the construction of the Sh177 million market in Mathare North Ward.

Speaking at the proposed site of the market, the Principal Secretary, State Department for Housing and Urban Development, Charles Hinga said that the project will accommodate 305 traders.

"This will be the country's 57th modern market constructed in the second term of President Uhuru Kenyatta's leadership," Hinga said.

The market will consist of a main shed with 40 shops whose wall will serve as part of the market’s fence.

Some 263 stalls will be divided  into fresh produce  and clothes  and wares sections.

In addition, the market will have two food courts  for traders to sell meals to consumers in the area.

The market will also have a cold room for storage of perishable goods.

"Fresh produce like fish and meat can be stored in cold rooms if all is not sold at the end of the day," Hinga revealed.

For security purposes, the state will erect high mast floodlights surrounding the market to light the area at night.

To facilitate sanitation, a borehole will be drilled for provision of drinking water and for cleaning purposes.

Further, two refuse bins will be stationed at strategic sections within the market for garbage disposal to avoid environmental pollution and illegal dumping of waste.

Ruaraka MP, Tom Kajwang' said that the market will create opportunities for  the youth and minimize insecurity cases in Mathare occasioned by unemployment.

“It is such an honour that Ruaraka will have such a modernized facility that will improve the socio-economic growth of the area," Hinga said.

The MP lauded the project saying it will also be a source of employment for the youth in the area.

Besides, he added, materials to be used for the construction of the market will be sourced locally.

"The youth residing in Mathare will contribute to the construction of this facility and that will improve the local economy,” Kajwang said.

Initially the project was to take 78 weeks but PS Hinga disclosed that the contractors will only take six months since they will be working 24 hours.

“As a department we saw that 78 weeks was a long period and therefore we we have cut it to six months, probably by the end of the year it will be opened for business,” he added.

The state awarded the contract to M/s Whitespan Enterprises in January this year.

The market has a capacity to accommodate approximately 10,000 businesses.
Counties
4 months ago

Says firefighting services will be designated within the market to contain frequent fires
Counties
5 months ago
WATCH: The latest videos from the Star
by MAUREEN KINYANJUI AND SHEILA WANJIKU
Nairobi
31 March 2022 - 19:01