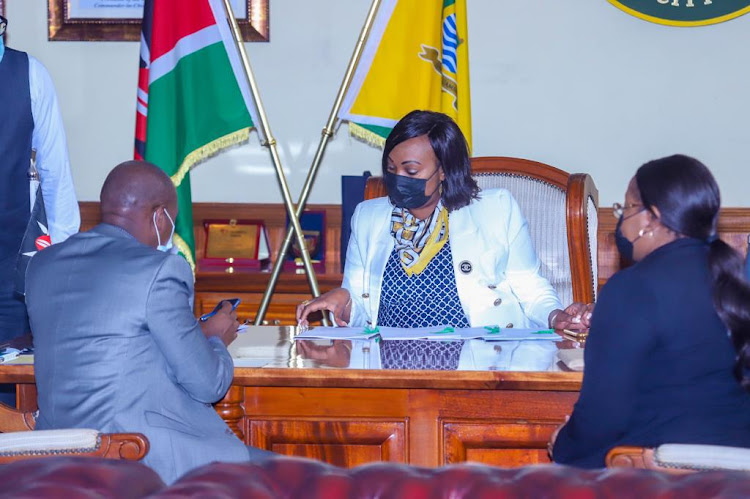 Nairobi Governor Anne Kananu might soon be forced to reshuffle her executive committee as she risks operating with a depleted cabinet.

More than half of her executives are aspiring for elective posts in the August elections and will have to resign by or on February 9.

This was meant to be the deadline for resignation for all public servants interested in vying in the August polls.

However, early this month the High Court temporarily suspended a directive by the electoral commission for them to resign by that date.

Despite the ruling, the governor is set to lose over half of the executive and two chief officers starting next month.

Among the chief officers is Mohamed Abdi (Devolution) who is seeking  the Lafey MP seat in Mandera held by Ibrahim Abdi Mude and Halkano Waqo (Agriculture)  who is eyeing the Saku parliamentary position in Marsabit to unseat Dido Ali Raso.

The Star has established that early this month, Kananu replaced Jairus Musumba, who was the acting county secretary, with ICT and e-government chief officer Peter Mukenya.

Musumba is said to have his eyes on a parliamentary seat in Western region.

In the 10-member cabinet, only three executives — Winfred Gathangu (Trade),  Hiten Majevdia (Health) and  Allan Igambi (Finance) have no political ambitions, at least in the forthcoming elections.

Transport executive Mohamed Dagane is said to be eying Wajir governorship but he is yet to declare.

Devolution executive Vesca Kangogo is seeking to vie for the Uasin Gishu governorship on the UDA ticket.

Not left behind is Education, Youths and Sports executive and activist Janet Muthoni-Ouko, who is said to be eyeing Kasarani MP seat in Nairobi.

Although not yet official, three other executive members are also said to be joining politics.

Environment executive Larry Wambua, ICT and e-government's Newton Munene and their Agriculture counterpart Lucia Mulwa could also be in the race  for political seats in Machakos, Kirinyaga and Kitui counties respectively.

Kananu has declared she will defend her seat.

With the developments, it is expected that a reshuffle could soon be in the offing to ensure  there is no vacuum in the committee.

Says he will create a market for farmers produce, mainly tea and milk if elected.
News
4 months ago