VICTIMS TO BE RESETTLED

One person was shot dead, six injured as residents protested the eviction 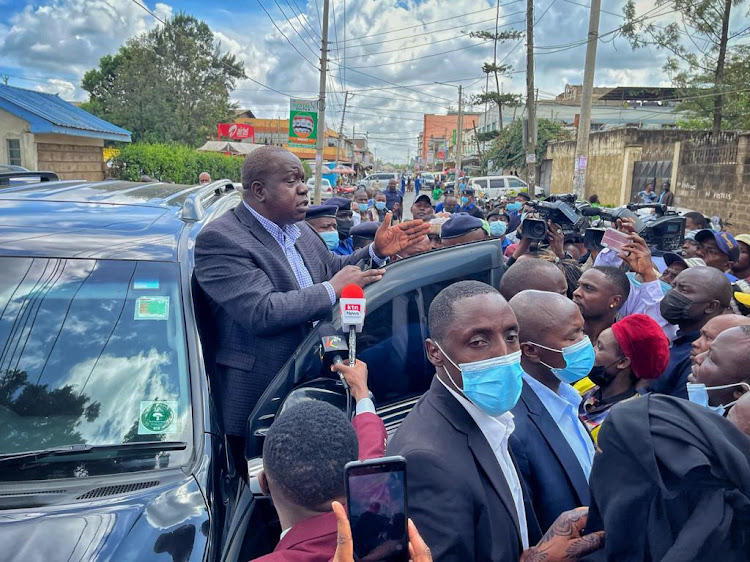 At least 14 junior police officers have been summoned to record statements over the demolitions at Mukuru kwa Njenga slums on December 27.

The officers were among security agents involved in an operation by the Nairobi Metropolitan Services to bring down houses in the slum for road expansion.

In the process, some officials expanded the demolition area in a land grab scheme.

The operation went wrong after one person was killed by police and six others injured during a protest by some of those affected by the demolitions.

Those injured have been asked to provide medical evidence. They are supposed to appear before the investigating teams on January 13.

On Thursday, Interior Cabinet Secretary Fred Matiang’i met some leaders from the slum to find a solution to the impasse that followed the operation.

A probe into the matter was ordered after President Uhuru Kenyatta visited the slum and was informed of the scheme behind the drive.

Two senior police officers have been sent on leave to pave way for the probe.

Officials say the probe is supposed to be extended to other government departments, including the NMS, the Office of the President and lands.

Matiang'i said hundreds of residents who were evicted from their houses in the slum will be resettled, following the President's directive.

Matiang'i and Lands CS Farida Karoney met some of the victims on Thursday in South B’s Mariakani Christian Centre and pledged to look into their welfare.

The victims were evicted following a court order.

Thousands of people were left homeless which attracted the attention of the President.

Karoney said they will, within a month, document those on the land in question, consult the occupants and the owner, audit documents available and agree before settling the victims.

“We are going to work with the community in order to regularise the settlement and also the land owner,” she said.

Matiang'i said the challenge in the slum is complex but the President is determined to find a lasting solution.

The CS said the planned construction of roads and other infrastructure upgrades in the densely populated area will, however, go on as planned but under a negotiated consensus with residents.

“We want everyone who is currently displaced to go back immediately. The instructions are that we immediately cease every activity in Mukuru kwa Njenga until everyone has been resettled," the CS said.

He criticised the Christmas evictions as ‘insensitive and unnecessary’. He said they had been executed by rogue officials who had already been disciplined for the aberrations.

Referring to the disputed land that is claimed by a private firm, Matiang'i said while the government respects private property and court-ordered evictions from disputed lands, it is also obliged to balance the enforcement of such rights and the welfare of displaced families.

“We respect court orders, but we will implement them in a framework that also respects the interests of the people we serve. We have called some of our officers to account,” he said.

He said those who lost their shelters in the incident will be resettled in the next 30 days, with a special focus on those sheltering in tents.

The CSs said only surveyors from the Ministry of Lands will be involved in the undertaking to avoid conflict of interest and interference by cartels.

In August 2017, the Nairobi government declared the Mukuru informal settlement a Special Planning Area and approved an Integrated Development Plan on infrastructural facelift.

The plan aims to improve access to water and sanitation, modern housing and electricity connectivity.

This would be implemented through the re-carpeting and upgrading of 70km of roads to cabro and bitumen standards and construction of a 24-bed Level 3 hospital in Mukuru kwa Njenga and Mukuru Kayaba.

Also, there is planned construction of 15,000 housing units under the Kenya Slum Upgrading Programme and the issuance of 1,329 titles.

The plan was to extend to the drilling of 10 boreholes and introduction of a water token system to reduce the cost of water. However, its implementation has been slowed down by controversies of land ownership and settlements.

Evicted residents in city slum to be resettled in new drive

Thousands of people were left homeless in the eviction.
News
2 weeks ago

My son was peaceful in life, says father of man killed by police