Uhuru back after Mozambique, South Africa and Uganda visits

Kenyatta is to preside over a military parade on Friday in Lanet, Nakuru 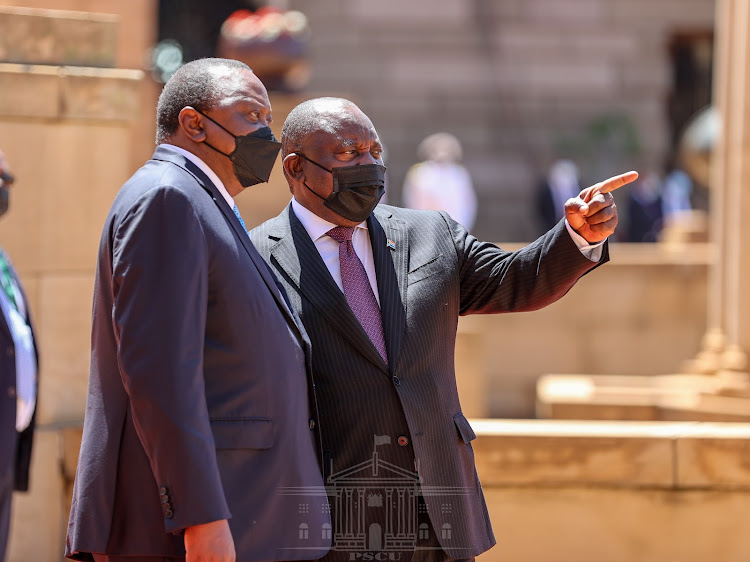 President Uhuru Kenyatta arrived back in Nairobi on Thursday after a weeklong visit to Mozambique, South Africa and Uganda.

Kenyatta is set to preside over a military parade on Friday in Lanet, Nakuru.

On Monday, he is expected to be at the National Police College Campus A, Embakasi, for the passing out parade of 2,610 recruits.

On Tuesday, he is to deliver the State of the Nation Address in a joint sitting of Parliament.

The President is expected to take stock of his administration’s milestones as well as state his plan for his final year in office ahead of the August 2022 general election.

MPs are set to go for their long recess on December 2, hence, the plan for the address on Tuesday,  not the traditional Thursdays.

The President left Kenya on November 18. He was the chief guest during the second edition of the 'Growing Blue' International Blue Economy Conference in Vilankuo, Mozambique.

President Kenyatta  arrived in Pretoria on November 22 for a three-day state visit and was officially received by President Cyril Ramaphosa. He received a 21-gun salute and reviewed an guard of honour.

The heads of state held private talks, then led their delegations in talks that resulted in the signing of eight bilateral agreements.

Later on Tuesday evening, Kenyatta and Ramaphosa addressed a Kenya-South Africa business forum. They urged the business community to leverage on trade and investments and strengthen bilateral ties.

On Wednesday, he flew to Uganda for talks with President Yoweri Museveni on regional security before jetting back to Kenya.

President Kenyatta is trying to help contain the crisis in Ethiopia involving the national government and Tigray region rebels.

The announcement was made during a joint press conference on Tuesday.
News
1 week ago
by CYRUS OMBATI Chief Crime Reporter
Nairobi
25 November 2021 - 22:00