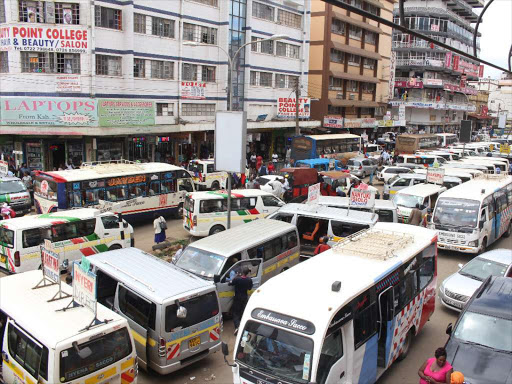 Pressure is mounting on City Hall and the Nairobi Metropolitan Services to rein in rogue matatu saccos.

The matatus are blamed for using roundabouts as termini, lay-bys and parking areas in contravention of the law.

Initial plans to decongest the Central Business District  by prohibiting matatus in the city centre have not yielded much.

In a motion passed by the Nairobi county assembly, Komarock MCA John Kamau said  the persistent use of roundabouts by PSVs has led to congestion, citing Outering area as example.

“The persistent use of roundabouts by PSVs as termini has continued to cause heavy tailbacks of traffic on a daily basis leading to loss of productive time and value for public money and investments,” he said.

As matatu congestion and traffic indiscipline continue to take root in Nairobi, some PSVs have resorted to take over roundabouts and convert them into parking bays and bus stage.

Outering and Koja roundabouts have been converted to a bus stage, while globe roundabout for the past two years has been a parking/holding ground.

In July, NMS announced it was finalising plans to acquire land that will convert globe into a bus terminus.

The acquisition is part of the decongestion strategy, including construction of at least six bus termini outside CBD that will be used once matatus are banned from the city centre.

Globe roundabout is one of the six bus termini being built by NMS at a tune of Sh350 million.

Supporting the motion, Umoja One MCA Mark Mugambi accused unscrupulous dealers of sabotaging order in the CBD by giving letters for pick up and drop off in undesignated areas.

He said that the rampant allocation of undesignated pickup or drop off points has lead to traffic snarl ups despite NMS efforts to decongest the city.

"Most of the matatus have designated picking and drop off areas but we have unscrupulous dealers that sabotage such efforts," Mugambi said.

He further said that the traffic brought by the congestion at globe roundabout next to the fire station would end up wasting time trying to join the main roads.

For several  months, Tom Mboya street, starting from Afya Centre to Koja stage has been converted to a matatu parking area as matatus drop and pick passengers without care.

This has contributed to the traffic snarl-ups and congestion.

The last legal allocation of picking or dropping zones was done in 2000.

A National Transport and Safety Regulations document released last year February showed that 272 matatu saccos are registered to operate in the city.

However, there are 420 unregistered saccos which brings the question on who allocated them space leading  to mushrooming of matatus in several roundabouts.

Minority whip Peter Imwatok blamed the county's Inspectorate Department for failing to enforce and restore sanity in the city.

He said the department is to blame for the disorder in the city.

"The failure has led to these roundabouts being occupied by cartels. It is a source of illicit collection of money to this department," Imwatok said.

The legislature said that despite the county recently contracting 800 inspectorate officers, no reforms are yet to be seen.

The assembly and NMS entities have been challenged to continuously enforce the foregoing prohibition notice using enforcement officers at the county and subcounty levels.

It was recommended that both should formulate regulations to Nairobi City County Transport Act, 2020 forthwith.

This is to provide for punitive measures for operators who illegally use roundabouts as termini, lay-bys or parking.