•  Pedestrians are still risking their lives crossing the busy avenue. NMS did not respond to calls or messages asking why the 10-month delay.

• In 2018, NTSA said Nairobi has the highest number of dangerous roads in the country. 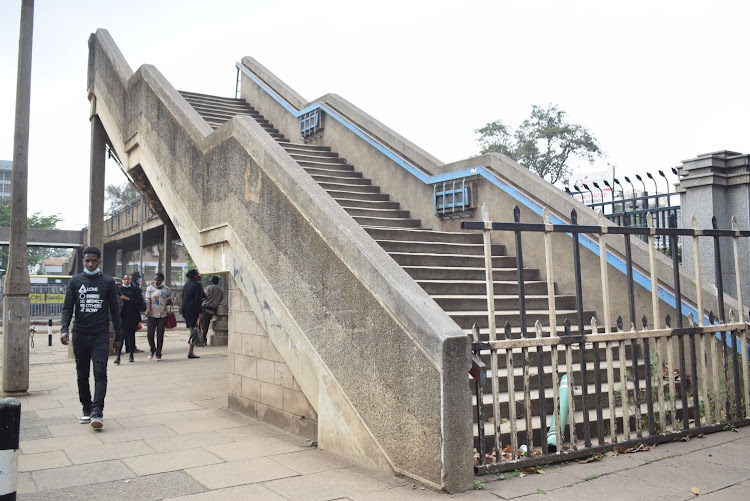 NO-GO-ZONE The iconic City Square Post Office footbridge along Haile Selassie Avenue closed by NMS after a trailer crashed into it 10 months ago, in January 2021.
Image: CHARLENE MALWA

Pedestrians are still risking their lives crossing Haile Selassie Avenue after a footbridge across the busy road was damaged by a trailer carrying an excavator.

That was 11 months ago. Nairobi Public Services closed it for renovation but nothing has been done.

The initial plan was to construct a new footbridge and meantime, NMS would erect a temporary steel structure to support the bridge as construction plans get underway.

NMS did not respond to phone calls or messages seeking comment.

Zebra crossing signs were painted along the road for pedestrians' use but they temporarily halt traffic flow.

A spot check by the Star on Wednesday morning revealed most pedestrians do not use the zebra crossings, preferring to walk to the Moi Avenue-Haile Selassie roundabout to cross.

“It is safer to cross the road at the roundabout since there is always a police officer stationed there. Although it was easier when the footbridge was there," pedestrian Zachariah Wafula said.

“We have to walk until the roundabout since in between most vehicles are in a rush to either leave or enter the busy CBD. We need the footbridge,” pedestrian Rosemary Njambi said.

When the National Transport and Safety Authority launched the Northern Corridor and Nairobi County Route Hazard Mapping Report in 2018, it revealed that Nairobi has the country's highest number of dangerous roads.

Of the 273 accident blackspots countrywide, more than 70 or about a quarter are in Nairobi. They include Haile Selassie-Railway roundabout and Riverside Drive junction.

The NTSA reported that pedestrians ignore footbridges — some of which were built away from human traffic points.

Post a comment
WATCH: The latest videos from the Star
by MAUREEN KINYANJUI News Reporter
Nairobi
03 November 2021 - 22:00
Read The E-Paper