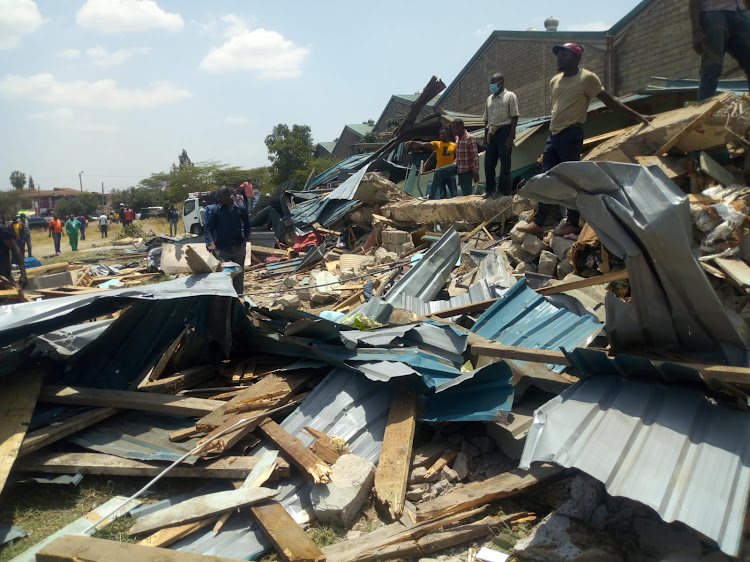 DEMOLITION: A workshop building and classroom at the Martin Luther Primary School was demolished in the early morning hours of October 6.
Image: HANDOUT

The demolition of Martin Luther Primary School in Nairobi is being investigated by Parliament as the destruction is denounced by residents and leaders.

Dozens of men destroyed a crucial workshop between 1am and 3am on October 6 under the supervision of armed and uniformed officers. The workshop was part of the school and opened in 1991.

It contained millions of shillings worth of equipment and had been serving the student body and providing hands-on classes.

They also destroyed a classroom, including desks, seats, tables, computers and other furniture.

No prior notice was given, headteacher Jackson Gichuguma said. He was notified at 1m.

Senators are investigating the demolition allegedly by a private developer claiming ownership of the land.

The latest destruction adds to the list of demolitions and hiving off of school land by private developers grabbing what should be public land.

Nairobi Senator Johnson Sakaja, who is eyeing the governor's seat, petitioned the Senate to inquire into the circumstances that led to the demolition.

He wants the House Committee on Lands, Environment and Natural Resources to summon authorities and the perpetrators to explain the action.

The public school is Makadara next to the Point Shopping Centre off Jogoo Road.

“I was alerted at 1am of the demolition and it was under the supervision of police officers, headteacher Gichuguma said. I know the history of the school and there are people who have been after the land since the days of the city council,” he said last week.

How did a company claiming the land get approval from the Survey of Kenya to subdivide part of the school land measuring 5.3 acres? Other estimates put the size at 11 acres.

Sakaja wants the Ministry of Lands, National Land Commission and City Hall to give a report on the status of the title deed for the school land.

Many public schools lack title documents, an avenue that unscrupulous developers exploit to grab the parcels.

In 2015, pupils at Lang'ata Road Primary School were tear-gassed as they protested the hiving off of their playground by a private developer.

President Uhuru Kenyatta directed the Ministry of Lands to issue title deeds to all learning institutions.

In 2019, the NLC issued a report on school land titling. It said only 97 out of 361 schools had title deeds bearing the name of the defunct Nairobi City Council.

Countrywide, only 2, 56 of the country’s 27, 43 public schools have title deeds for their land.

“With the increase in grabbing of land for public institutions, the Commission gave a policy direction for processing of titles to all government institutions,” the report read.

Sakaja wants assurance from Nairobi Metropolitan Services and the Nairobi government to explain plans to fence the schools to protect them from grabbers.

Ownership of 275 acres in court for years; structures torn down in July.
Counties
2 months ago

A HUGE uproar has followed the tear-gassing of schoolchildren as they protested the grabbing of their playground in Nairobi yesterday. Five ...
News
6 years ago

Public schools to get title deeds under new law