Are private morgues driving City Mortuary out of business?

Tarmacked pavements, manicured lawns and freshly painted walls welcome you to Nairobi's City Mortuary, a stark contrast to a facility that was previously associated with stench and poor services.

Tarmacked pavements, manicured lawns and freshly painted walls welcome you to Nairobi's City Mortuary, a stark contrast to a facility that was previously associated with stench and poor services.

But behind all this orderliness, the public morgue is staring at a bleak future as it loses business to mushrooming funeral homes across the country.

The facility is losing business fast and could soon be forced to review its existence.

Kenyans have been celebrating infrastructural development that has seen counties open up and linking Nairobi to the rest of the country.

With the construction of major roads like the Thika Superhighway, a lot of business have mushroomed along the highway with privately owned morgues now given room for business.

Marking his 28th year of service, Head of City Mortuary Dr David Wanjohi says the morgue has seen a decline in business over the past few years.

“In the 1990s, there was only one morgue in Nairobi. But things have changed and now business has gone down at the City Mortuary with fewer bodies being brought into the facility,” he said.

Wanjohi said in the past, people from as far as Western part of the country kept their loved ones at City Morgue.

However this is not the case anymore as more facilities have been opened in the outskirts of the city bringing the services closer to rural areas where most people bury their loved ones.

People have opted to use the morgues outside the city centre to save on transport cost and escape the traffic snarl-up in Nairobi.

“Nowadays due to the development of infrastructure, people go to Kenyatta University Funeral Home as they head to Central. There is also  Umash in Machakos and Montenzuma along Nairobi -Naivasha highway,” Wanjohi said.

According to Wanjohi things got worse when all morgues were given a go ahead to issue burial permits unlike before when City Mortuary was the only one mandated to do so.

“In the past, bodies had to be bought to City Mortuary, postmortem done and burial permit given before a family could take their loved one to morgues of their choice. Even Chiromo could not receive bodies without a burial permit from us,” he added.

The Coronavirus pandemic had a negative impact on the morgues as families opted to bury their loved ones as quickly as possible denying them revenue from preservation costs.

“You would assume with the pandemic more bodies would be brought here but that was not the case, most people opted to take their loved ones to private morgues than bring them to the public one,” Wanjohi added.

On average, City Mortuary receives around five bodies through police cases and two in private cases unlike in the past where we could get 30 bodies daily from private clients.

In the past, all bodies were bought to the city morgue whether private, police case or accidents.

“When I joined this facility in 1993 bodies were too many such that we ran out of space in the freezers we had, some had to be put on the floor. Nowadays we hardly receive bodies especially on Fridays unless its police case,” Wanjohi said.

Despite competition from other morgues, Wanjohi believes City Mortuary still offers the best services and will never run out of business.

He said that due to the good work they do, other morgues seek their services up to date.

“We can never close or run out of business. This is the only morgue where road accident victims' bodies are bought before relatives identify their loved ones. Once brought here, we convince the family that we offer the best morgue services and are able to preserve the bodies for them,” he said. 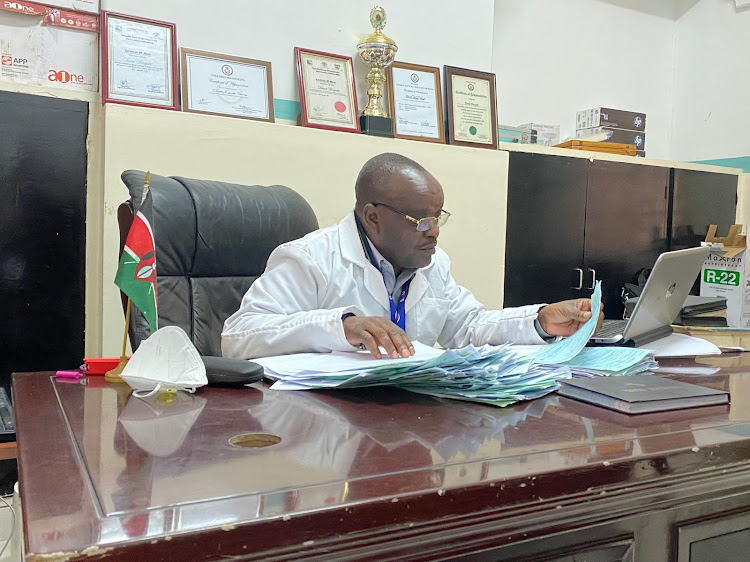 Clients shortage due to the many private morgues has lead to a drastic decline of revenue at City Mortuary and this has seen them change tack in order to remain in business.

“In the 1990s police cases were not being paid for even after the body was identified, the only charges would be on washing and dressing the body at Sh420. Even if the body stayed in the facility for months no preservation costs were charged. Postmortem would be done and relatives given the body,” Wanjohi said.

However  City Morgue now charges a standard fee of Sh500 per day regardless of whether its a police case or the body was privately brought.

For embalming, one is charged Sh2,500, washing and dressing at Sh2,800 then this is added to  number of days the body stays in the morgue.

March and April have been considered the best months for business so far this year in terms of revenue where Sh8.7 million was collected at the morgue.

This was attributed to the cessation of movement that was announced by President Uhuru Kenyatta in March that banned movement in and out of Nairobi.

“The lockdown restricted movement for people in Nairobi and because they  could not go upcountry to bury their loved ones, they opted to utilise Langata cemetery and thus preserved their loved one at our facility,” Wanjohi said.

In August the morgue made Sh3.6 million after preserving 124 bodies.

“In April we got over Sh4 million meaning we made Sh139,000 daily. The charges vary since not all bodies are the same in terms of sizes,” Wanjohi added.

Data from the mortuary revealed that in February Sh2.7 million was collected while in March the amount rose to Sh4.1 million after 171 bodies were preserved.

The number of bodies increased to 173 in April bringing in Sh4.6 million.

The revenue declined in June to Sh2.2 million generated from 138 bodies while in July 192 bodies were kept at the morgue, generating Sh3.1 million.

The declining fortunes of City mortuary had been attributed to its dilapidated state.

The morgue was at some point associated stench and poor services.

However the facility has undergone renovations since the Nairobi Metropolitan Service was established in March last year.

“I came here in 1993 when I was still a young man as a mortuary attendant. In the 1990s working at the morgue was bad. Those who were in charge tried to change things but it was impossible,” Wanjohi said.

Over the years the situation got worse with roofs leaking,  the facility  lacked water and hence keeping the toilets clean was a problem, he said.

“Free water flow was a problem here.  No renovation was done and the structures and equipment that existed when the mortuary was built in 1958 still remained in use,” Wanjohi added.

By then the morgue had a capacity to accommodate six bodies but as the years went by, it was expanded and now we have the capacity to hold 176 bodies.

Despite the increase of capacity, status of the infrastructure remained dilapidated.

"In 2016, coolers  at the facility had broken down for almost weeks causing a disaster. By then 14 machines were running the coolers but only five were in good condition."

Following NMS's renovations the ablution block is now fully installed with flashing system and running water and the taps have water.

Walls from the offices to ablution blocks and inside the morgue have been repainted, paths within the compound have been tarmacked and litter bins placed around the facility.

“In terms of environment, City mortuary is okay.We are thankful for NMS for the initiative they took to refurbish this place. The morgue has also been equipped with the necessary chemicals we need for our work,” Wanjohi added.

However, the morgue is in need of new freezers as the existing ones often break down.

There are 14 freezers at City with only seven are functioning.

“The other seven are meant to be standby freezers, you can now imagine what would happen if the functioning ones breakdown, we will not have back up,” he said.

NMS has been requested to replace the freezers with new ones instead of repairing them every time to save on cost as repairing them is proving expensive.

“We are in the process of repairing them and have done the Building of Quantities and already forwarded it to NMS awaiting implementation ,” he said.