•The park was initially a den for criminals and solid waste dumping ground but has since been reformed into a modern green space.

•The park was established in 2012 and is situated along Nairobi River between the Globe Cinema roundabout and the western end of Uhuru Highway. 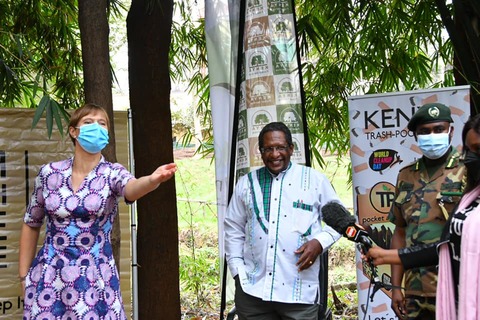 Her visit to John Michuki Memorial Park coincided with this year’s World Cleanup Day that is commemorated every third Saturday of September.

Kaljulaid was hosted by Environment and Forestry CS Keriako Tobiko at the park where she planted a tree, Vitex Keniensis (Meru Oak), to commemorate her visit to Kenya.

The World Cleanup Day is commemorated every third Saturday of September each year and is aimed at combating the global solid waste problem, including marine debris and pollution.

During the event, a cleanup was done along the Kijabe Street to create public awareness about keeping the environment clean.

Tobiko said the cleanup was meant to create public awareness to make a positive behavioural change in everyday lives to reduce the burden of waste in our environment.

“As we undertake the cleanup activities today, we also need to develop clear strategies that can lead to a reduction in the quantum of waste generated, and the need to ultimately change public mindsets to ensure that the need for cleaning becomes part of our daily lives,” Tobiko said.

Tobiko said citizens' attitude and behaviour have remained major impediments towards realization of a clean, secure and healthy environment for all.

He said his ministry has in the last few months through the National Environment Management Authority embarked on the cleanup of the Nairobi River Basin to address the issues of untreated effluent discharge into the rivers, this has greatly enhanced the quality of water in this green space today.

"This was also followed by enforcement actions by our inspectors to inspect all the facilities along the river basin that resulted in a number of facilities and establishment along the Nairobi River Basin being closed down due to pollution, he said.

Nema director general Mamo Mamo said Kenya led the global community in 2017 in ban on the use of single plastics.

“It is gratifying to look back and celebrate the milestone made in getting rid of plastic carrier bags in Kenya,” he said.

Mamo said when the environment is compromised, lives are endangered and citizens' opportunities for better standards of living are profoundly curtailed.

“It is our collective and individual responsibility to take action for a safer, healthier and cleaner future,” Mamo said.

Michuki Park was initially a den for criminals and solid waste dumping ground but has since been reformed into a modern green space.

The park was established in 2012 and is situated along Nairobi River between the Globe Cinema roundabout and the far end of Uhuru Highway.

It is in the neighbourhood of Kijabe Street, Kipande Street, the National Museums of Kenya, Hotel Boulevard, Nairobi University's School of Diplomacy and the Norfolk Apartments.

Former minister John Michuki, now deceased, won admiration and accolades for his enthusiasm and determination to clean and preserve the environment.

In 2009, he was internationally recognised for redeeming Nairobi River.

The United Nations Environment Programme presented him with a certificate recognising his efforts to clean the river, which had been choking on human and industrial waste.

The park was neglected soon after he was moved from the environment docket.