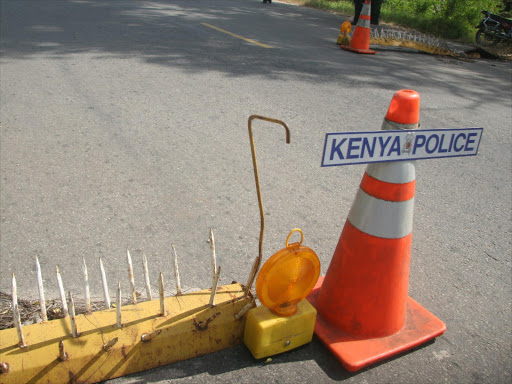 A senior police officer was injured on Sunday night when a speeding motorcycle struck him at a Covid roadblock in Pangani, Nairobi.

Pangani OCS Samir Yunus was manning the roadblock along Dr Griffin Road when he was hit.

He was admitted to a hospital. The cyclist was arrested and the motorcycle impounded.

The cyclist told officials he lost control as he sped home to beat the 8pm curfew. The accident happened at 8.30pm.

Yunus was among officers manning the roadblock to implement the Covid-19 curfew regulations.

For the second day, some motorists were detained for violating the rules. Police along Thika Road lit a bonfire to warm those stuck in a long traffic queue.

Motorists were allowed to proceed after being held for more than an hour.

On Saturday night, it took two hours before police finally allowed motorists through the roadblocks after 11pm.

Citing the 8pm curfew rule, security officers said residents would not be let through and roadblocks would be set up nightly.

Hundreds of Nairobi residents were stuck on busy routes. Those stranded took to social media, saying they had been informed they would stay at the sites until 4am when the curfew ends.

Ambulances were allowed to pass through the roadblocks.

Officials said the roadblocks were required after it emerged there was no compliance to curfew rules.

Nairobi regional commissioner James Kianda said a review and assessment of Covid containment measures showed compliance is less than 50 per cent in the Nairobi metropolitan area.

“We also note with concern there is willful violation of these protocols in estates, especially the prohibition of large in-person gatherings and compliance with curfew restrictions and other health protocols,” he said.

“However stringent these rules may appear, they are imperative for our survival. Civic responsibility is a more potent weapon in this war than enforcement of the guidelines by the police.”

Going forward, he added, traffic management will be reviewed and enhanced to facilitate a smooth transition into curfew hours.

“We are also fully aware of construction works on major roads within the metropolis, and we urge wananchi to plan their movements accordingly to beat the curfew,” he added.

If everyone plays their part, Kenya can reach the five per cent positivity rate and the economy can be reopened, he said.

Kianda was reacting to residents' complaints about being held up at roadblocks in long traffic jams.

The 8pm to 4am curfew runs until May 29 in five hotspot counties of Nairobi, Kajiado, Machakos, Kiambu and Nakuru.

Other counties must observe the 10pm to 4am curfew.

The order says there shall be no public gatherings, processions or movement either alone or as a group during the period of the curfew except when permitted by authorities.