• Last year, at least 320 traders were arrested as police intensified their operation to decongest footbridges in Nairobi.

• Whether it is Outering Road, Mbagathi or Thika Superhighway, the situation is the same—or even worse. 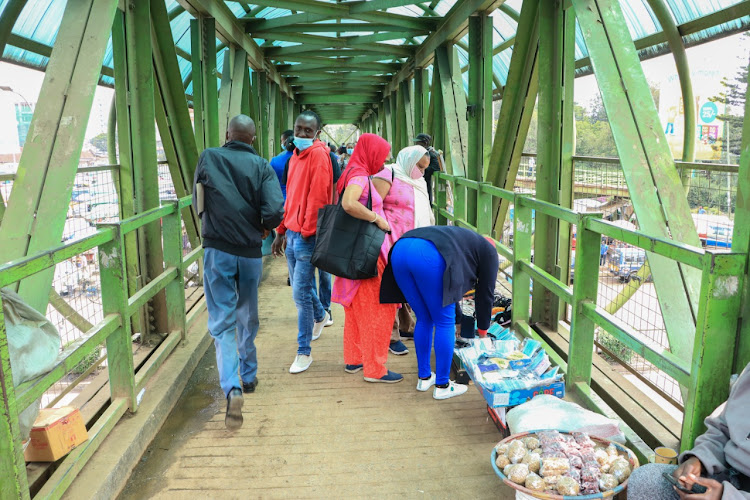 Pedestrian struggle for space at the Ngara footbridge as hawkers take over to sell their items on April 16, 2021
Image: WILFRED NYANGARESI

Road accidents involving pedestrians had been getting out of hand and as a remedy, the government moved in to build footbridges and walkways.

The measures were meant to ensure the safety of pedestrians and reduce the carnage. However, despite the good intentions, these designated areas have been taken over by traders, boda bodas, street families, beggars and, in some cases, muggers.

Whether it is Outering Road, Mbagathi or Thika Superhighway, the situation is the same—or even worse.

At one point, Landhies Road footbridge was completely taken over by street families and hawkers. Pedestrians soon started avoiding it. It has now been abandoned, with shoe cleaners spotted on and off. The footbridge had also become a ‘chill-out’ spot for muggers and thieves, prompting pedestrians to use alternative places to cross the busy road.

The footbridges and the walkways are no longer safe. Concerned residents say using them is more dangerous than crossing roads and what was to be a solution is instead making their lives difficult.

The footbridge across Haile Selassie Avenue is rarely used by pedestrians. It is almost fully occupied by traders, especially shoe vendors.

“Just by the sight of it, I can’t use that footbridge because you rarely even see people walking there. And with the street boys sitting under the bridge, I don’t feel safe,” Janet Mumbi said.

Another resident, Justin Oketch, said, "Even before the curfew [was imposed], the footbridge was a place of crime where muggers used to wait for commuters to pass by [then ambush]. I’d rather attempt and cross the road carefully.”

At the Ngara footbridge, the situation is even worse as pedestrians go to an extent of queuing to pass as hawkers have occupied huge space. People going in the opposite directions struggle to get past each other.

The situation is not different on Outering Road at the footbridge linking Buruburu to Umoja estate. Traders start displaying their items in the morning. Boda bodas have also turned it into a shortcut.

Riders who do not want to use the road to get to the Outering-Kangundo Road roundabout or Manyanja Road prefer the footbridge. This has left pedestrians feeling unsafe.

The walkway stretch around Outering–Kangundo Road roundabout all the way to Pipeline has also been occupied by businesses. It is a display area for carpenters selling beds and desks. Welders also place their products on the walkways as they target customers. 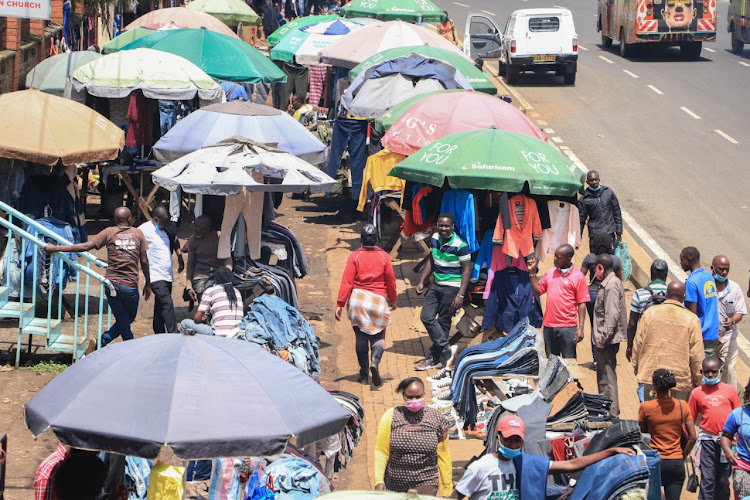 Hawkers on a walkway at Ngara on April 16, 2021.
Image: WILFRED NYANGARESI

According to Tena and Umoja residents, the problem at the footbridge started in August last year when Mutindwa market was demolished and encroachers were driven out of railway land.

"The problem started when Mutindwa market was demolished. The traders who were left without structures started selling their items around the footbridge, but now they have even invaded the structure itself—right at the entrance of the footpath,” said Gilbert Kamau, a resident of Umoja.

Sharlene Wangeci said, "On one of the stairs, they have placed their items, leaving us with little space left to walk. The boda bodas have also found their way to the footbridge, posing a danger of running us over.”

Pedestrians are at times forced to walk at the roadside as traders have occupied the walkways.

"The traders had been given space to operate from a few metres on the roadside, but they have now encroached on the footpaths. We cannot be walking on the road and risk being hit by cars, or am I mistaken that those walkways were not platforms for hawking?" posed Herman Owiti.

Although they understand the traders and businesspeople are trying to earn a living in the midst of a pandemic, the residents want the walkways to be left for the right purposes.

“I only wonder for how long this matter will be the subject of residents' concern. It’s a visible problem, yet the authorities don’t seem to share. We can only lament and pray, otherwise, the place is a risk, a nuisance that should immediately be tackled,” Michael Omega said.

The residents are now calling upon the county government and the police to take action against the invaders.

“We will soon have increased accidents of pedestrians knocked by vehicles as they attempt to cross the roads because they cannot use the footbridges,” Celestine Apiyo said.

In February last year, at least 320 traders were arrested as police intensified their operation to decongest footbridges in Nairobi. The arrests were conducted in swoops by all police divisions. 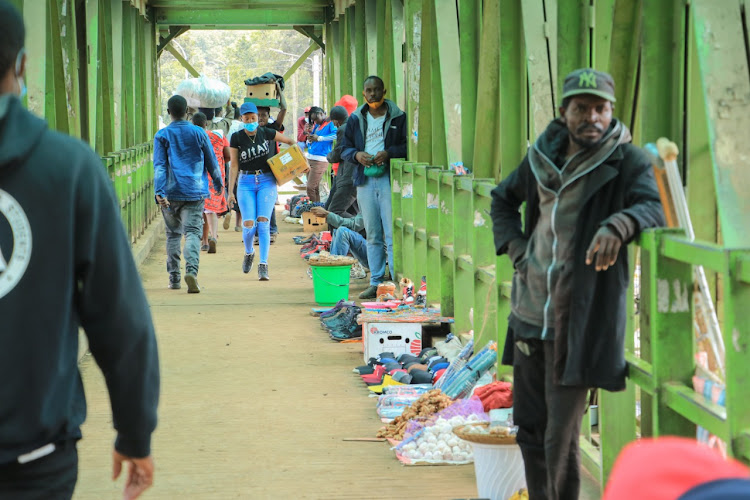