Matiba honoured because of his contribution to Kenya's muli-party democracy

• Nairobi MCAs described the former Kiharu MP as a modern-day freedom fighter who helped free the country from the dark days.

• Kayole Central MCA Jeremiah Themendu said Matiba left an indelible mark in the hospitality and education sectors and was an accomplished public servant. 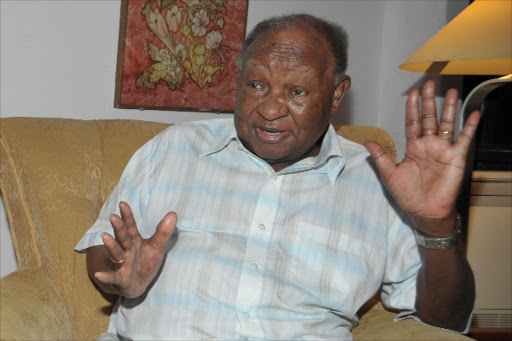 Three years after his demise, the Nairobi County Assembly has honoured former Ford-Asili party leader Kenneth Matiba by renaming a road within the Central Business District after him.

This comes after the MCAs last week on Thursday passed a motion to rename Accra Road after the veteran politician.

In the motion which was moved by Nairobi Central Ward MCA Daniel Ngegi, the MCAs raised concerns that not much had been done to honour Matiba despite his enormous contributions to Kenya.

“This assembly urges the County Executive, in conjunction with the Nairobi Metropolitan Services, to rename Accra Road in Nairobi Central Ward to Kenneth Matiba Road in honour of the pro-democracy icon regarded as one of the pioneers of democracy, evident by his heroic efforts in pressing for the return of multiparty democracy in the 1990s,” he said.

The legislator described the former Kiharu MP as a modern-day freedom fighter who helped free the country from the dark days.

“Currently Kenya is enjoying multi-party democracy due to Matiba’s contributions to it. He sacrificed his life for a better Kenya and renaming a road after him will go a long way even to generations to come,” Ngegi noted.

He further highlighted that Accra Road played a significant role during the clamour for multi-partyism as it was a place of refuge for Matiba during the Saba Saba day.

“Back in the days, the late Matiba used Accra Hotel that is owned by the late Nairobi Mayor John King’ori, to regroup and re-strategise after being clobbered and tear-gassed," Ngegi said.

Supporting the motion, Kilimani MCA Moses Ogeto said it is unfortunate that Matiba has not been honoured like most of his contemporaries.

Kayole Central MCA Jeremiah Themendu added that Matiba left an indelible mark in the hospitality and education sectors and was an accomplished public servant, having served as the first indigenous African permanent secretary for education in 1963.

According to the assembly, renaming Accra Road “Matiba” will reunite heroes, Charles Rubia and Matiba.

A number of Nairobi roads and streets have been named after prominent Kenyans.

Kapiti Crescent road in South B has been renamed after late football legend Joe Kadenge.

Mbingu led a protest from Machakos to Nairobi with residents unhappy with a colonial policy requiring that Africans de-stock cattle, taking away their wealth.

He was gunned down protecting Kenyan territory against Somalis who wanted to take over Northern Kenya from Isiolo upwards.

Mama Ngina Street was known as Queens Way during the colonial era but named after Kenya's first First Lady, the mother of President Uhuru Kenyatta.

Kimathi street was known as Harding Street but renamed after Field Marshall Dedan Kimathi, as a way of honouring his role in the Mau Mau war.

Ronald Ngala Street was previously known as Duke Street after the British noblemen of the highest hereditary rank.

After Kenya attained Independence, the road was renamed after Ronald Ngala, a member of the Kenya African Democratic Union (Kadu) during first President  Jomo Kenyatta’s government.

Post a comment
WATCH: The latest videos from the Star
by MAUREEN KINYANJUI News Reporter
Nairobi
22 March 2021 - 12:42
Read The E-Paper