The development proposal is meant to increase the park's attractiveness

• KWS acknowledges that infrastructure projects such as the Southern Bypass, SGR and the Inland Container Terminal road messed up with the park.

• Friends of Nairobi National Park says the push for the plan is suspect at a time when the coronavirus is wreaking havoc in the country. 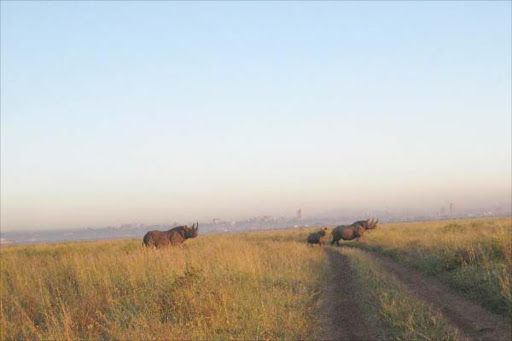 AT RISK: The Nairobi National Park is threatened by among others habitat loss, poaching and human-wildlife conflict.

Conservationists and nature lovers are opposed to some aspects of the proposed Kenya Wildlife Service facelift of Nairobi National Park "to improve its attractiveness".

Friends of Nairobi National Park fears - in a protest letter dated April 17 - that the Draft Management Plan 2020-2030 will lead to the end of the park.

There plan has identified 12 issues that threaten the park founded in 1946.

The KWS admits that it may have contributed to the challenges facing the 117-square-kilometre park. It allowed mega projects inside and on the periphery of the park.

These include the Southern Bypass and Internal Container Depot roads.

“The Southern Bypass passes through the park, and it has cut off a section of the park that borders Wilson Airport. The impacts of this road include noise and air pollution from traffic plying the road.”

There are old and new pipelines passing through the park as well as wayleaves.

Overhead power pylons and underground power cables have also been constructed in the park.

“Six kilometres viaduct to hold the Standard Gauge Railway has been constructed across the park. There is a need to paint it to blend with the environment and minimise visual intrusion.”

The deadline for comments and views on the draft plan was yesterday (Sunday).

FoNNaP says it has no objects to 90 of the 122 objectives of the draft plan. “We are in full agreement to 90 of those actions, in other words, about 75 per cent.”

However, they have issues with 32 planned actions.

“We therefore ask that you stop the process of formulation and pending approval of this document until the current state of the country improves and we are no longer faced with restrictions due to Covid-19,” the FoNNaP said, recommending a minimum of three months.

The Kenya Wildlife Service has admitted that it may have contributed to the challenges facing the park which is renowned for being among major metropolitan parks in the world.

Several negative impacts on the park environment were identified during the installation of T-frame pillars along the 7.2 km Standard Gange Railway ESIA corridor. The most notable was disturbance of the park environment. Each pillar involved a 4X4 metre excavation area.

Other impacts of SGR  were noise and vibration during the construction and operation stages.

Also identified were the risk of introduction of invasive species and solid waste disposal during the construction phase.

Scientists and conservationists were vehemently opposed the SGR traversing the park. KWS allowed the project notwithstanding the objections.

With the Draft Management Plan 2020-2030, KWS hopes to reverse some of the damage by addressing the major issues of concern.

Four management options had been considered. The first was to maintain the status quo and the second the improvement of the habitat through controlled burning, grass mowing and mineral supplementation.

The third was to enclose the entire park with a predator-proof fence. The last option was to improve the park habitat coupled with progressively fencing off willing landowners in the park’s buffer zone.

FoNNaP is against any further development of infrastructure in the park which has a total road network of 287 kilometres.

KWS plans to put up a multi-billion-shilling eco lodge and also to upgrade the road network.

FoNNaP says many of infrastructure proposals will be aesthetically unappealing. It also warns against the provision of the special-use zones in the park. The park has more than 100 mammal species and over a dozen different reptiles.

An estimated 400 permanent and migratory bird species have a home in the protected area as do African buffalo, the baboon, the Eastern black rhinoceros, the Southern white rhino, common zebra, and Grant's gazelle.

The park has more than 45 lions among carnivores such as leopards, cheetahs, and hyenas. Hippopotamuses inhabit the Mbagathi River while crocodiles reside in the dams. KWS has 120 employees.

The number is projected to increase to 216 in the Draft Management Plan.