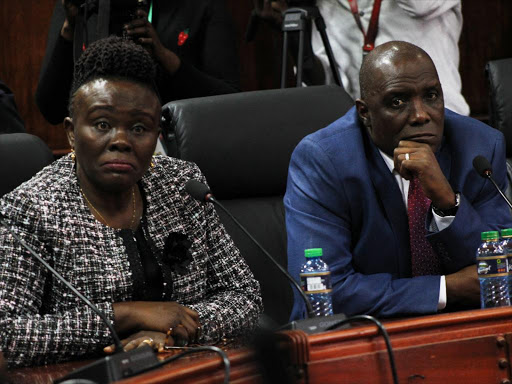 In affidavits filed in court, Mukolwe said compensation was made to property owners whose title deeds had been revoked.

She said payment was made to beneficiaries in Embakasi and Athi River contrary to a decision of the committee on review of grants.

Mukolwe chairs the committee which is mandated to establish the legality and propriety of title deeds.

Her affidavit was in response to a case in which NLC valuation and taxation director Salome Munubi and chairman Muhamad Swazuri have been charged with the compensation scandal.

Munubi said the payments were made after a complaint letter by some of the beneficiaries.

“I was surprised to find out there was an internal memo dated December 2016 that was not copied to me. The memo authorised payments in Embakasi and Athi River contrary to the resolution of the committee on review of grants and disposition,” Mukolwe said.

She said the payments were made while she was away from the office on official leave.

Later, the NLC initiated an internal audit to get to the bottom of the matter. The audit and risk management department undertook a fact-finding exercise in March last year.

Affidavits show the audit report found that four of the nine payments made were for properties whose titles had been revoked.

Munubi said did not attend the meeting where an appeal by the beneficiaries was discussed.

“I was not privy to the meeting where the decision of the commission to revoke titles to the properties held by the interested parties were reversed or overturned,” Munubi said.

The titles were revoked because the property was found to be on a railway reserve.

But the Kenya Railways Corporation said the parcels were not railway reserve and that NLC never provided supporting documents to support its claim.

The corporation’s principal land surveyor Erastus Mwangi saic KR does not have documents showing the land is a railway reserve.

“Based on the information available in our drawings and boundary definition documents, the disputed five parcels have not been within the corporations reserve either through vesting or acquisition,” Mwangi said.

He said the land is within an area denoted as Embakasi Township Reserve.

EACC accuses Munubi of fraud in the facilitation of the compensation because she was aware the titles had been duly revoked.