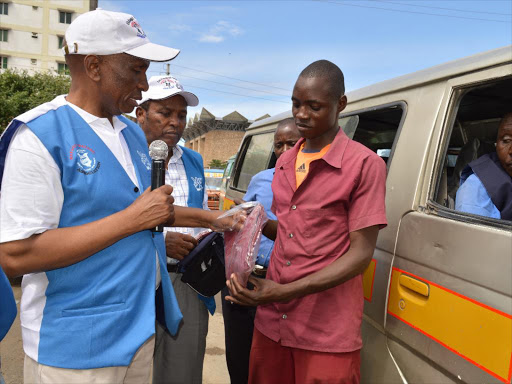 Matatu Welfare Association national chairman Dickson Mbugua chats with a matatu operator after giving him the association jacket during a peace caravans initiative during the general elections and after at the Likoni bus terminus in Mvita constituency, Mombasa county.Photo / JOHN CHESOLI

“Let’s stop burying our heads in the sand; it is the responsibility of the sacco management to punish rogue members,” he said yesterday.

Mbugua said the members had lobbied for the saccos to be allowed by the government to either adopt saccos or companies on various routes, and go ahead to register.

The matatu sacco leadership is usually elected every

Mbugua said the sacco leaders should control, regulate their members and discipline those not following rules.

“Let us not hide behind and say the ‘individual’ driver should be punished.

The leaders must foresee that operations within the route within the sacco are compliant with the law and that is why they have to apply for road service licences for their members.What do the sacco leaders fear?” he said.

Mbugua said rogue members should be given two warnings and if they don’t comply, the third time should be a dismissal letter.

The name of the dismissed member should then be removed from the sacco and forwarded to NTSA to keep a record,which would then prevent the person from being employed in another sacco.

Matatu Owners Association chairman Simon Kimutai applauded NTS for suspending the licences of six matatu drivers who were caught on camera driving recklessly and dangerously in the city centre.