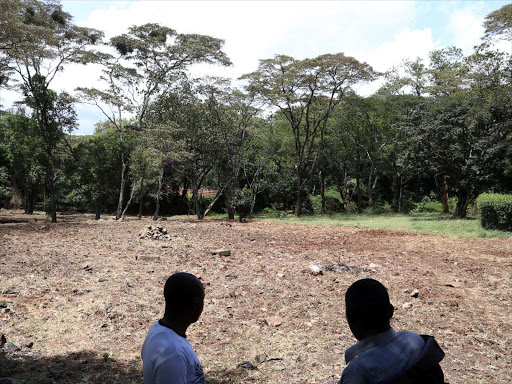 Two men view part of the four acres, which had been cleared just behind the Murumbi Memorial at City Park on May 1, 2014 /HEZRON NJOROGE

Slain businessman Jacob Juma's title deed, which he obtained after laying claim to five acres at the City Park has been revoked.

Nairobi Lands executive Christopher Khaemba said City Hall wrote to the National Land Commission to revoke several title deeds of people who claimed to own part of the City Park.

"All those title deeds, including the one of five acres owned by Jacob Juma, have been revoked. We are focused on preserving the park," Khaemba told the Star on the phone.

He said all the information on the revocation is contained in the Kenya Gazette notice published last month.

However, this comes after neighbours raised the alarm that there are people grabbing City Park.

"We visited the area with the Deputy Governor and perhaps residents did not understand that we were out to protect the park," Khaemba said.

Some residents told the Star that some senior officers at City Hall were out to grab a section of the park and they had put up beacons.

However, Khaemba said no one at City Hall is grabbing the park.

Last week, Friends of City Park raised the alarm over what they called a new plot to grab the land.

Assistant administrator Sylvia Ochanda said new beacons were put up at the weekend.

She said they were placed behind and in front of the main parking area, down to the Boscowen Collection point.

“The covert operation was executed when few people were present. It is ironic that just after celebrating Mashujaa Day, the park would again be put under threat,” Ochanda said.

The Friends of City Park held a meeting with residents, NGOs and businesses at the National Museums of Kenya to discuss how to conserve and protect the park.

They resolved that a multi-agency team be formed to manage the park and a fence be erected to protect it. Friends of City Park chairperson Catherine Ngarachu said the park was originally 222 acres (90 hectares), but 74 acres (30ha0 have been grabbed by private developers since 1923, when it was declared a public utility.

Post a comment
WATCH: The latest videos from the Star
by CHRISPINUS WEKESA @ChrispinusW
Nairobi
12 November 2016 - 05:00
Read The E-Paper