“We are scared and at pain to face another cycle of staff harassment and intimidation."

•Wahome has, however, laughed off claims of harassment and intimidation adding that he met the officials on September where they talked on way forward.

•On the issue of salary delay, Wahome said this is more of flow of funds from the national treasury and it is affecting the whole Country. 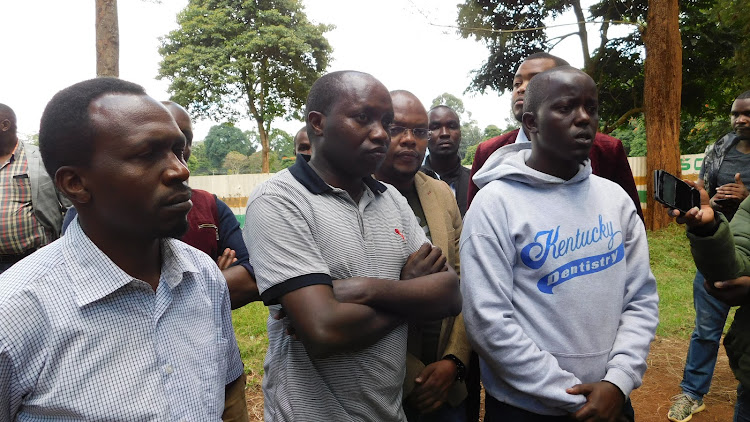 Meru health workers have issued seven days strike notice over what they termed as intimidation, harassment, salary delays and demotion.

“We are scared and at pain to face another cycle of staff harassment and intimidation. The question we ask ourselves is, will chief officers already on war path really address workers issues?” Baiyenia posed.

Wahome has, however, laughed off claims of harassment and intimidation adding that he met the officials on September where they talked on way forward.

On the issue of salary delay, Wahome said this is more of flow of funds from the national treasury and it is affecting the whole Country.

“That is not something within the control of the County government,” Wahome said.

On withheld salaries emanating from a court order, Wahame said Governor Mwangaza instructed the finance to start preparing it.

"It is ongoing and they will be paid," he said..

He said they were to form a work Council with which the administration will engage with on matters affecting workers.

“We haven’t started working as I am in acting capacity laying ground on a number of issues. We wouldn’t wish to harass our own staff. I am not so sure where this is coming from. I cannot give a feedback on their demand for me to be removed from office because they are not the appointing authority,” said

The officials said a meeting with Wahome to iron out their grievances especially staff harassment at Meru teaching and referral hospital did not materialize.

“In the meeting the chief officer rather than responding to our issues promised that he shall do things as he wants. We took those words lightly but true to his words last week on Thursday, one of the union official received transfer letter which he was expected to report to the new work station within 72 hours," Baiyenia said.

“As we speak the officer is undergoing too much pressure. Just like other county employees, he has not received salary for the month of October."

They said that Governor Mwangaza had directed they be paid with immediate effect but they are yet to be paid 2 months down the line.

They exonerated Governor Kawira Mwangaza from their suffering and praised her for her commitment to see smooth health service delivery to Meru residents.

“We know our governor; all along she has publicly declared that it is new beginning for the workers. She has raised our hope and spirits in believing that we shall never again be treated in inhuman manner. We are humbly calling upon her to come to the  rescue of workers,” Baiyenia said.

They lamented that almost 700 officers’ salaries were withheld for January, February and March 2021 for being involved in strike.

This comes even as County fights to contain Cholera outbreak where 14 cases have been confirmed.

Meru public health officers have been on high alert urging hawkers to suspend food hawking until the disease is contained.

All public health officers have been directed to carry out food hawking crackdown as under the public health Act cap 242 and food and chemical substances Act cap 254 laws of Kenya.

Post a comment
WATCH: The latest videos from the Star
by GERALD MUTETHIA Correspondent, Meru
Eastern
14 November 2022 - 21:53
Read The E-Paper