• "This body might have been dumped here after he was murdered elsewhere. There are no signs that he was killed in a road accident," an officer earlier told the Star.

• It was reported to Kithyoko Police station in Masinga subcounty, under OB NO: 5/11/2022 as a murder incident report. 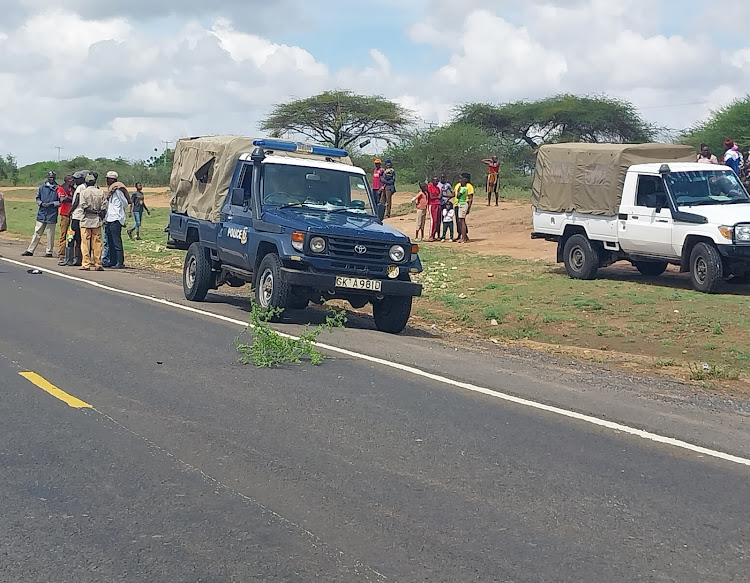 Members of the public mill around a scene where a man's body was found dumped along Nairobi - Garissa highway at Kanyonyo area, Machakos County on Sunday, November 13, 2022.
Image: GEORGE OWITI

Police have ruled out a possible accident on the body found lying along Nairobi – Carissa highway in Machakos County.

It was reported to Kithyoko Police station in Masinga subcounty, under OB NO: 5/11/2022 as a murder incident report.

“It was reported by area assistant chief Mr. Daniel Nzomo Muthoka that there was hit and run accident along Matuu – Kithyoko road about 10 kilometres South West of the station. Officers from the station visited the scene and found a lifeless body of a young man lying down covered with a cloth,” a police report seen by the Star read in part.

Police said on arrival, the officers found traffic personnel already at the scene and it was established that it was not an accident, but murder disguised as a road accident.

The body, according to the officers, had deep sharp cuts on the head and the stomach.

“Also, his private parts were severed off,” an officer said.

The body of a man identified as Joseph Kyalo Nzui, 42, was moved to Mbaku mortuary awaiting a post mortem.

Detectives from Masinga subcounty have launched investigations into the incident.

An officer had earlier told the Star that it was suspected the man might have been murdered elsewhere and his body dumped on the road.

"This body might have been dumped here after he was murdered elsewhere. There are no signs that he was killed in a road accident."

An officer told the Star that they were informed of the body at around 6.00 am on Sunday.

The body which had visible injuries was still lying on the road by 10.00 am
News
3 weeks ago
Post a comment
WATCH: The latest videos from the Star
by GEORGE OWITI Correspondent - Machakos
Eastern
13 November 2022 - 17:18
Read The E-Paper