Despite being part of the Azimio alliance, the MP said he was ready to cooperate and work with Ruto's government

• The MP said political season was over and his political 'enemies' should rest.

• Despite being part of the  Azimio alliance, the MP said he was ready to cooperate and work with Ruto's government 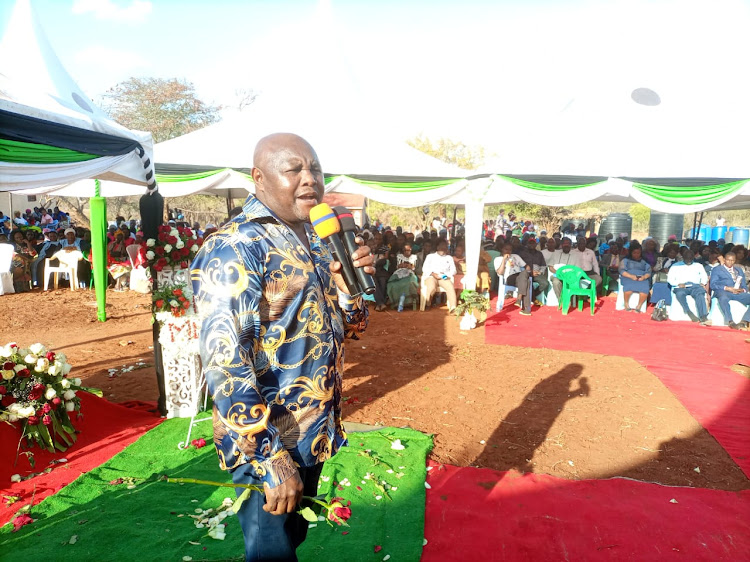 Mwingi North MP Paul Nzengu speaking at the burial at Itundua village in his constituency on September 10, 2022.
Image: MUSEMBI NZENGU

Mwingi North MP Paul Nzengu on Saturday said that he is ready to work President-elect William Ruto's government despite being in Azimio.

He said this is to ensure his constituents benefits from national government services.

"I recognize William Ruto as Kenya's new president and when I start cooperating with his government, no one should brand me a defector from Azimio because it's all for the benefit of my people," Nzegu said.

He lauded his constituents for re-electing him during the August polls.

Nzengu said he was ready to serve all his constituents diligently and indiscriminately without fear or favour.

"I am thankful and really humbled by your having confidence in my leadership and giving me a second chance as you MP," he said.

He added that the political season is over and his political 'enemies' should rest.

"I hold no grudge against anyone. It was a political competition and since I won it is time to serve all."

He told his constituents that he was optimistic they will continue benefiting from CDF programmes despite a recent court order outlawing the fund.

"Once we resume sittings in parliament our first business as MPs is to review the problematic clauses in the CDF so that Kenyans can continue enjoying benefits," Nzengu said.