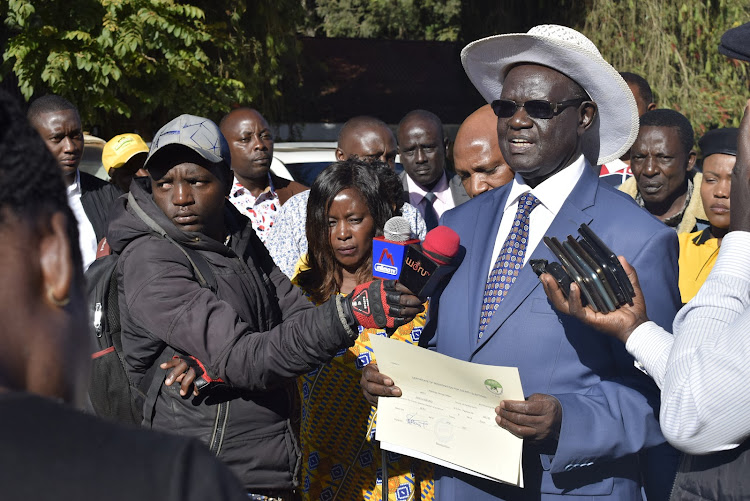 Speaking during a campaign rally in Meru town, the county boss said he will continue to improve health infrastructure in dispensaries, health centres, and hospitals.

He further said he will streamline the procurement and stocking of drugs in all health facilities.

Kiraitu promised to invest more resources in promotional and preventive health and intensify public health education to reduce the prevalence of preventable diseases such as diabetes, malaria, dysentery and HIV/AIDS, among others.

“We will also initiate a process to enhance the elevation of Meru Level 5 Hospital to level 6 as a parastatal with its own independent board, like Kenyatta hospital," the governor said.

"We will also create two more level 5 hospitals in the county to cater to the entire population in the region.”

To reduce the financial burden on cancer patients who have to travel to Nairobi and India to seek treatment, Kiraitu said he will facilitate the construction of an ultra-modern cancer centre next to Meru Level 5 Hospital at a cost of Sh1.6 billion.

Already, 2.5 acres of land have been allocated near the hospital for the construction of the facility.

“We will also continue to support the Meru hospice which has been on the frontline in fighting cancer menace in the county by taking care of the terminally ill," he said.

He also promised to expand National Hospital Insurance Fund coverage to the most vulnerable groups in society, including People with Disabilities and the elderly.

“I will also provide free medical cover for all Meru county citizens who are 65 years and above,” the county chief said.

For the first time in the history of Meru, the county has established a renal unit, an Intensive Care Unit and a cancer centre at Meru Level 5 Hospital.

A histopathology lab has also been opened at the hospital to enhance cancer testing which has consequently reduced the waiting period for results.

The county has also completed the construction of a new 250-bed capacity ward block at the Meru Teaching and Referral Hospital at a cost of Sh350million.