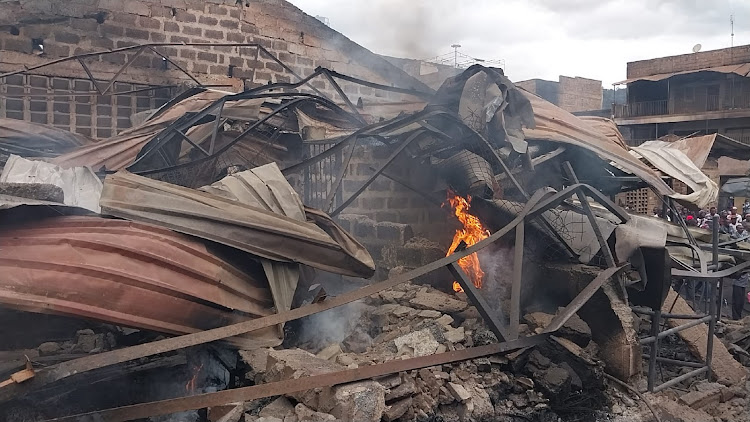 Micro and Small Enterprises authority CEO Henry Rithaa has said they will re-plan and build the razed Grogon market in Machakos county.

He said the authority will camp at the scene for two weeks assessing the extent of damages and develop lasting solutions.

The CEO spoke to the press at Grogon market on Tuesday.

The cause of the Monday 3pm fire is yet to be established.

"What matters right now isn't the loss, but restoring livelihoods," he said.

Rithaa said the immediate task is to ensure the victims get back to their sources of livelihoods.

"That's why we are here. These buildings need to be assessed in terms of their structural recoverability. Are we able to rebuild the structures as they are or afresh?

"The committee needs to come up with a report based on the extent of damage as property worth tens of millions of shillings was lost," he said.

"We will also look into how we organise our work sites across the country. This is just one out of 170 such work sites and industrial centres," he said.

The CEO said they are also looking to replace some of the machines and equipment given to the victims by the authority.

"We will be here for the next two weeks as our engineers assess the structural soundness, since the fire was vicious and could have destroyed the foundation.

"We need to clear the place, approximate the losses and plan. If we find out that what is required doesn't need site clearing, we will be here for a week or so," he said.

The authority's chairman James Mureu said it is unfortunate that traders lost their property to the inferno.

"We have come to access the extent of damages and to be able to compile a report urgently to the government. So that we can see how to quickly restore livelihoods of this Jua Kali community.

"We have seen massive destruction of finished products, machinery and at the moment, it will be hard to quickly assess. But we hope that we will be able to come to a figure that we can say, this is the actual loss," he said.

Mureu told the victims to rise above the disaster, dust themselves as soon as possible and rebuild.

Fire breaks out at a Machakos town market

The cause of the fire that broke out around 3 pm is yet to be established.
News
7 months ago

Musyoka said she has been doing business in the market since 2003.
Counties
7 months ago

The County government has dispatched counselling psychologists to attend to victims.
News
7 months ago