Says Wiper leader must be respected and treated with dignity

• Muthama said Raila's political band wagon had disrespected Kalonzo to the extent of exposing him to an interview for the running mate position.

•  Raila on Monday named Martha Karua as his running mate, with Kalonzo announcing that he will get to the ballot as a presidential candidate on a Wiper ticket. 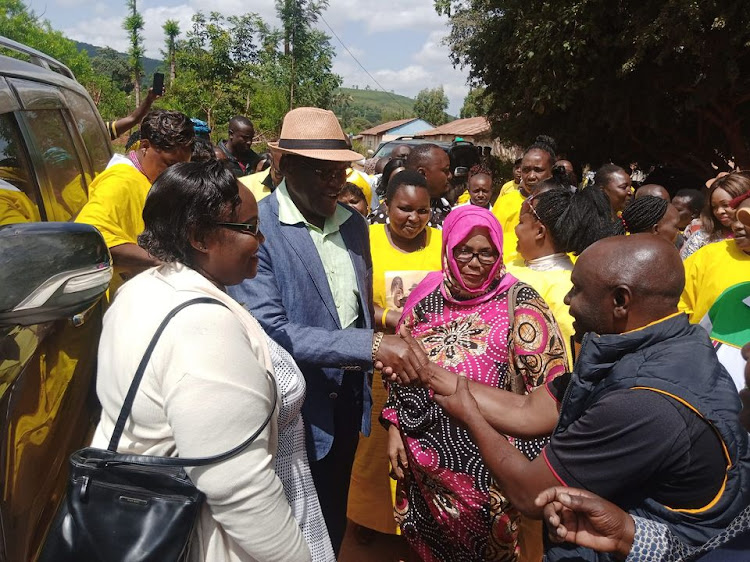 Muthama said former Prime Minister Raila Odinga had disrespected Kalonzo to the extent of subjecting him to an interview for the running mate position ahead of the August 9 polls.

He, for the second time, said Kalonzo must be respected not only as the Ukambani kingpin, but also a distinguished Kenyan leader with international recognition.

“Kalonzo is our son, he should be respected and treated with dignity,” Muthama said.

He spoke on Sunday at ABC Church Kangondi in Mwala, Machakos, where he officially unveiled his running mate Faith Muli. Muthama is contesting for Machakos governor on a UDA ticket.

Raila on Monday named Martha Karua as his running mate, with Kalonzo announcing that he will get to the ballot as a presidential candidate on Wiper ticket.

Muthama said Kenya Kwanza has a national outlook, hence will emerge victorious in the August polls.

He said they consulted widely before making the decision as Kenya Kwanza to support Ruto to presidency.

“Let me tell you, we have numbers as Kambas. We as Kenya Kwanza started this journey together with our brothers and sisters from the Kamba community.

"We had consultation meetings with Kambas even before rolling out to the electorate, whom we keep interacting with at the grassroot levels,” Muthama said.

The chairman said he has a well planned development blue print for Machakos county as a governor aspirant.

He said his plan, vision and aspirations are to ensure lives of residents are transformed through his leadership with Muli.

Muthama said Ruto’s government has also planned well for the entire country, in terms of development and opportunities.

The plans, he says, include the three Ukambani counties of Machakos, Makueni and Kitui.

“We as Kenya Kwanza leaders have had meetings and planned for this country. The recent one being held in Amboseli, where we discussed what is needed in Makueni, Kitui and Machakos counties.

"That conversation wasn’t about Western Kenya only as perceived by some people, but the entire Republic of Kenya,” Muthama said.

The former Machakos senator said they are planning for a meeting that will be attended by more than 10,000 people from Ukambani, including those from the diaspora.

He said the meeting, which will be held at Komarock in Matungulu subcounty will include the signing of their memorandum.

The memorandum, he said, will be presented to Ruto who will be in attendance.

“We, Kenyans in UDA and Kenya Kwanza aren’t cocooning to share leadership positions. But, uniting all Kenyans without discrimination. We want to work and ensure we deliver to all Kenyans,” Muthama said.

Muli thanked Muthama for considering her as his running mate.

She praised Muthama saying if elected, she will work together with him for the best interests of residents.

UDA official slams Kalonzo over decision to run for presidency

Maina said Kalonzo had failed to stick to his word in the recent past.
News
1 month ago

Some media reports have said that Kalonzo could vie for the country's top seat.
News
1 month ago

He says he will run as president on the Wiper ticket under the Oka coalition.
News
1 month ago
“WATCH: The latest videos from the Star”
by GEORGE OWITI Correspondent - Machakos
Eastern
17 May 2022 - 22:00