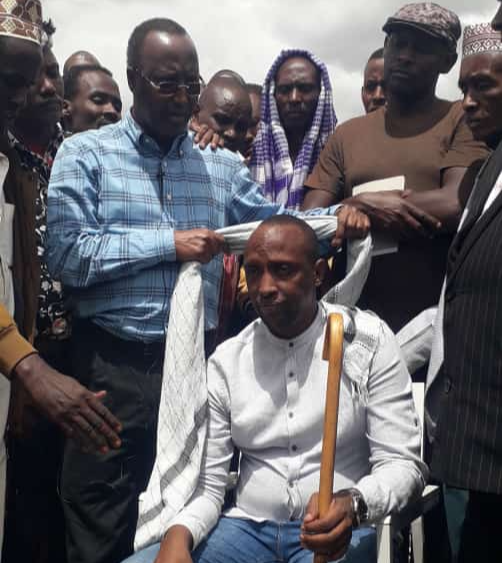 The scramble for elective seats in Isiolo has intensified two weeks after many incumbents lost party primaries and chose to run as independents.

Already the battle lines have been drawn, with new alliances and counter-alliances ahead of the August 9 general election.

The much-publicised Jubilee Party primaries locked out a number of incumbents and those endorsed by elders through negotiated democracy.

Dr Kuti’s move surprised the opponents, who viewed the retirement as a calculation and meant to push his rivals back to the drawing board.

"I am taking this opportunity to thank Isiolo residents for electing me for four consecutive times and also serving them as a medical doctor. I will not be defending my seat due to health challenges,"  Governor Kuti said last month.

The race to succeed him will now be between former Governor Doyo and Guyo.

Early last week, Guyo dumped his running mate Hudson Kinyua from the Meru community and picked on James Lowasa (Turkana) to deputise him.

Kinyua switched camp and joined Doyo, with a promise to secure for Merus the position of county secretary, a CEC post, two chief officers and a member of the County Public Service Board.

Doyo, who met members of the Meru community allied to Kinyua in Isiolo, pledged to offer more appointments and opportunities in his government.

"It’s going to be a deal between us; we will have a signed agreement between us. You should support us in our new alliance so that when we form government we share out the positions among our communities,’’ Doyo said.

In a counter move, Guyo also met some Meru leaders allied to Kinyua in Nanyuki to weaken Doyo's strategy and solidify his base ahead of the election.

Guyo held a series of meetings last week with Dambenon elders from the Borana subclan who pledged to back him.

The Nairobi majority leader assured the elders his government will embrace inclusivity, cohesion among the various communities living Isiolo, empower youths and women and help in reconstruction of infrastructure.

"We are going to rebuild Isiolo together. My leadership will be inclusive. I am calling on youths, women and elders to turn out in large numbers and vote me in on August 9 as your governor," he pleaded.

Other factors that may influence the voting is development track records and political influence to woo other communities living in Isiolo.

Guyo hails from Sakuye clan, Doyo from Warjida, Ntoribo is Meru while Dida Waqo is from Karayu. Isiolo enjoys unique diversity, hosting almost all the 43 tribes living in Kenya.

North Eastern and Upper Eastern counties are hotspots of inter-community and resource-based conflicts, where livestock theft and banditry are the main issues fuelling fighting.

Waqo and Tene, who fell out with Doyo during negotiated democracy, will likely complicate the situation for the former governor who would have bagged the Karayu and Warjida clan votes.

If Guyo manages to consolidate Turkanas, Samburus, Meru, Somalis and a section of Borana votes, this will give him an edge over the others.

Doyo says if elected he will streamline service delivery and ensure equitable distribution of resources in the county.

"My development track records in Nairobi will speak for me. If elected I will initiate more projects to spur economic development," he said.

Isiolo North has 54,606 registered voters  while Isiolo South has 20,667, according to the latest IEBC figures

Isiolo boarders Marsabit, Meru and Samburu counties and has an estimated population of 280,000 people.

The residents heavily depend on pastoralism and subsistence farming along the Ewaso Nyiro and seasonal rivers, mostly in Central division.

Isiolo has four game reserves that are a major tourism earner for the region. It has been earmarked for a resort city in the Vision 2030 government blueprint.

Construction of an export standard slaughterhouse in Isiolo town will be complete by the end of the year. Fresh beef and other livestock products will be exported overseas via Isiolo International Airport.

Other mega projects under construction by the county government are a national standard stadium, modern market, county headquarters and assembly chambers.

Isiolo has experienced a measure of peace since Dr Kuti won the elections, leading to expansion of the town.

Investor confidence was restored, with the government's commitment to elevate Isiolo airstrip into an airport to serve Upper Eastern.