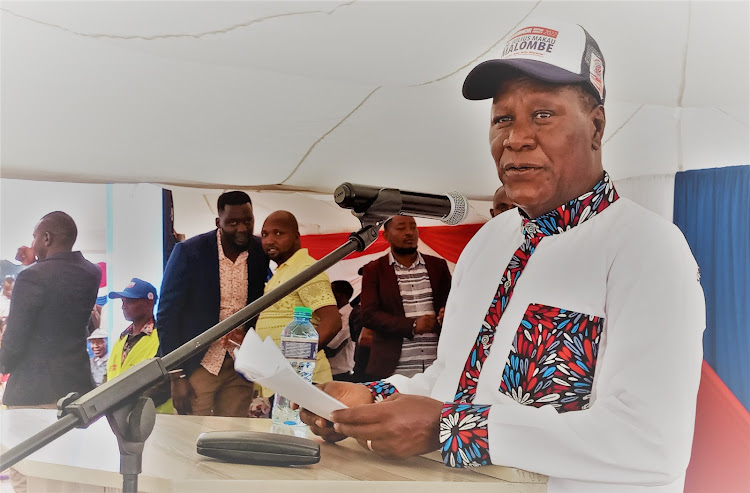 Former Kitui governor Julius Malombe wants the Wiper leadership to go by the results of the opinion poll it commissioned and hand him the ticket.

Malombe who is eyeing the Kitui governor seat was ranked ahead of other contestants in popularity.

He had a popularity rating of 60 per cent ahead of former Kitui senator David Musila's 21 per cent and incumbent Governor Charity Ngilu's 9 per cent.

Malombe said the polls put the popularity of former Kenya’s High Commissioner to Uganda, Kiema Kilonzo and former Nairobi governor Jonathan Mueke at eight and one per cent respectively.

The former governor spoke on Saturday at the Kitui Kefri centre where he launched his 15-point manifesto and gubernatorial bid. 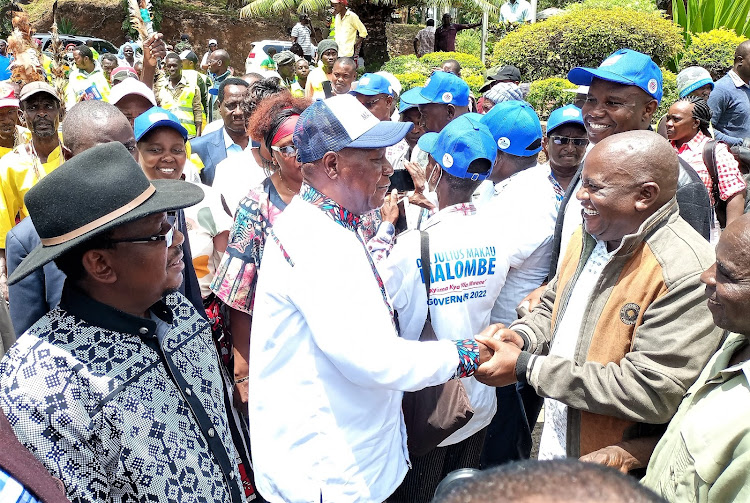 LANCHES BID: Former Kitui governor Julius Malombe greets supporters when he arrived for the launch of his manifesto and his gubernatorial bid at the Kitui Kefri center on Saturday, April 2.
Image: MUSEMBI NZENGU

He thanked the people of Kitui for rating him as the most popular gubernatorial candidate not only in the Wiper party scientific survey but also in earlier opinion polls carried out by other bodies.

Buoyed by the result, Malombe said with such overwhelming popularity, the party shouldn't waste finances in gubernatorial nominations which he would obviously win resoundingly.

Malombe and Kiema are angling to fly the Wiper flag.

Musila who left soon after the results of the Wiper opinion poll were released decamped to Jubilee party.

He will be taking his second shot at the Kitui gubernatorial seat come August 9.

Malombe said the party couldn't make the mistake of putting him and Kiema through nominations as such a mismatch whose result was obvious would be a travesty of democracy and justice and waste of funds. 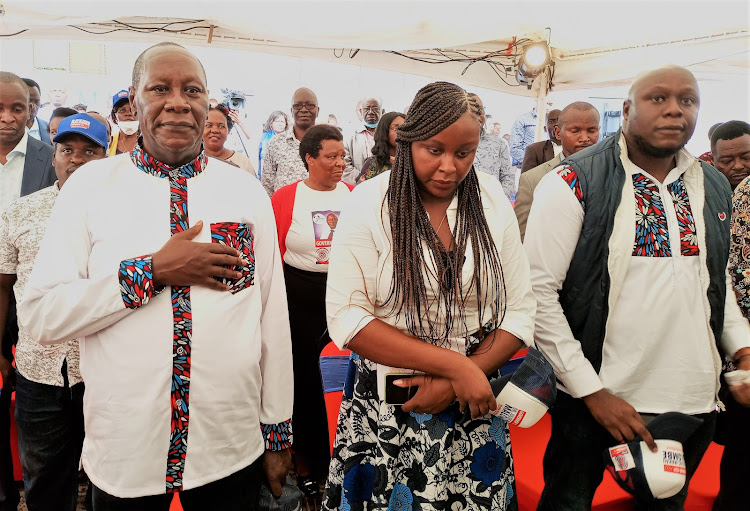 POPULARITY CONTEST: Former Kitui governor Julius Malombe, his daughter Kavinya Makau and son Robert Malombe during the launch of his manifesto and his gubernatorial bid at the Kitui Kefri center on Saturday, April 2.
Image: MUSEMBI NZENGU

“If a learner scored eight per cent in Standard 7, he cannot transit to Standard 8. The teacher advises the parent to allow the weak learner to repeat Standard 5 for him to catchup with studies,” he said.

The former governor said a man who scored eight per cent in popularity rating should not waste the time of Kitui people.

He however said he was sure to whitewash Kiema if the Wiper party goes ahead with the nomination exercise.

Malombe said most people rated him as a perfectionist in his performance, not engaging in the pilferage of public funds and a leader with a clear vision for Kitui.

He said he will resuscitate all the projects that stalled after he left office in 2017.

The former governor said he will re-hire all the ECDE teachers and Community Health Volunteers who were dismissed after change of regime.

Raila, Kalonzo to hit the road in joint campaigns

I'll protect Uhuru just as I did Kibaki, says Kalonzo

Biggest dilemma is on how to pick gubernatorial candidates in Kitui and Machakos counties.
Counties
4 months ago

David Musila will run for the Kitui governor seat in the August 9 elections.
News
4 months ago
“WATCH: The latest videos from the Star”
by MUSEMBI NZENGU News Correspondent
Eastern
03 April 2022 - 22:00