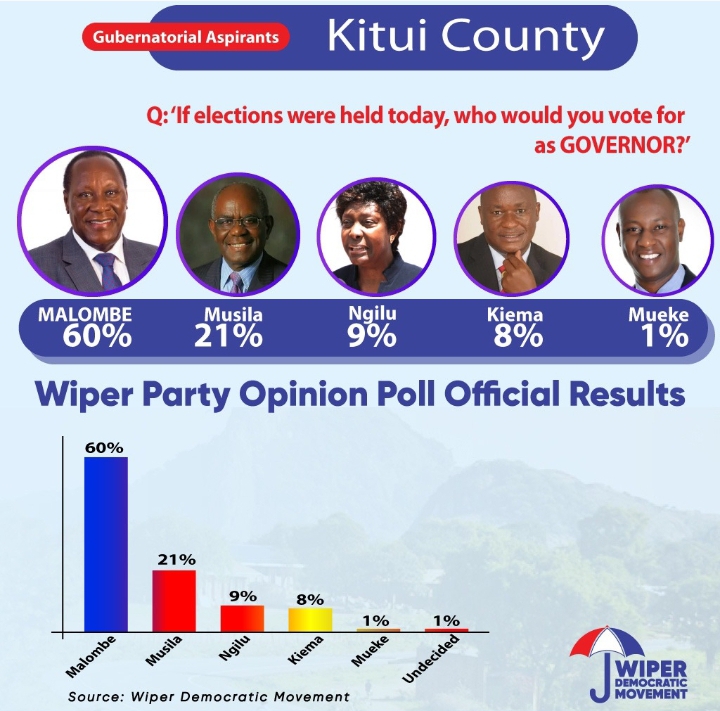 Apparently, the biggest dilemma is on how to pick the gubernatorial candidates in the two Ukambani counties of Kitui and Machakos.

Political pundits say the acrimony that resulted in the 2017 Wiper Kitui gubernatorial primaries cost the party the seat.

Musila later quit the party and vied as an independent after claiming he had been rigged out. He was the party national chairman.

But as fate would have it in the 2017 election, both Musila and Malombe ended up sharing the spoils and lost to the Narc candidate Charity Ngilu.

It is a repeat of such a costly fallout that party leader Kalonzo Musyoka is struggling to avoid.

This has led Kalonzo and his party to initiate a scientific survey to establish who among the governor hopefuls is popular to contest in the polls.

The idea is to ensure the direct ticket goes to the most popular candidate and convince the others to remain in the party and support the chosen candidate.

In Kitui county, the survey was conducted in all the eight constituencies and 40 wards, with Malombe garnering 60 per cent of the votes while Musila had 21 per cent.

The opinion has forced Musila  to ditch the party once again.

He has found a home in Jubilee on whose ticket he will seek the Kitui gubernatorial seat.

Musila, who in the past expressed support for a scientific poll to pick the Kitui Wiper gubernatorial candidate, made an about-turn and said the polls were a manipulation skewed in favour of Malombe.

With Musila out, Kalonzo and other top party leaders have so far held two sessions with Malombe and Kiema for a negotiated democracy to persuade Kiema to drop out and back Malombe.

Kiema has however insisted they should face Wiper supporters in nominations. He sees the scientific survey results as having been doctored to achieve a preconceived end.

“Opinion polls are always manipulated to achieve a certain objective., especially those carried by interested parties," Kiema said in a text message.

"If indeed candidates are popular, they should be subjected to a free, fair and credible nominations to validate the polls.”

The Wiper leadership, which according to insiders, is keen to give a direct ticket Malombe, is walking a tightrope as they do not want to offend Kiema.

What complicates the matter further is that Kiema has the support of Kalonzo’s son Kilvin Muasya whom he has picked as his preferred running mate should he win the Wiper ticket.

On the day Kalonzo inked a deal with Raila Odinga-led Azimio la Umoja at KICC, Muasya was at a rally at Ngomeni in Mwingi North, where he announced that he would be Kiema’s deputy.

Malombe, on the other hand,  believes his massive popularity stems from the development track record when he was governor.

Malombe's close political aides say his candidature is people-driven, having been requested by the residents to come back to leadership.

The team said the county residents have no space for new promises as nothing can beat what Malombe achieved with minimal budget compared to Ngilu’s.

They are upbeat that the situation which prevailed in Makueni county will also happen in Kitui. In the county the opinion poll showed Mutula Kilonzo Junior leading with a wide margin against Philip Kaloki.

Kalonzo reportedly prevailed on Kaloki to stand down and allow Mutula to fly the flag. Kaloki has since withdrawn from the race.

And even as Kalonzo seeks a middle ground between the Malombe and Kiema camps in Kitui, a similar scenario is unfolding in Machakos county.

In both the Machakos and Kitui cases, talks are still ongoing to build a consensus on who should exit the race in favour of the other.

Direct nominations are more practical and affordable than democratic primaries which will still be open to manipulation and controversy.
Opinion
7 months ago

Political party nominations are a cornerstone of democracy; there is a need to ensure primaries are free and fair.
Opinion
7 months ago