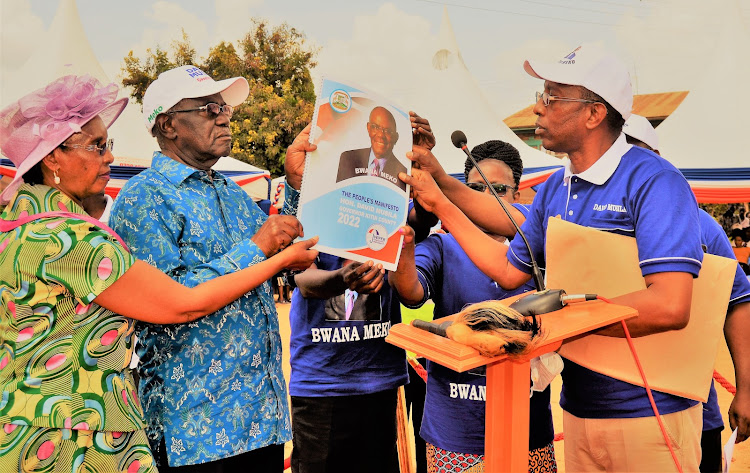 ACRIMONIOUS NOMINATIONS: Beatrice Musila and Kitui gubernatorial aspirant David Musila receive a copy of his manifesto from the chairman of the drafting committee Gilbert Ngesu at the Musila garden on Saturday, March 19.
Image: MUSEMBI NZENGU

Wiper leader Kalonzo Musyoka has been asked to avert a possible fallout in the party after former Kitui senator David Musila threatened to quit.

Musila on Saturday accused Kalonzo's handlers of frustrating his bid for the Wiper ticket in the race for Kitui governor.

He said he will seek to run as an independent.

Musila ditched the party in the run up to the 2017 general election after losing to Julius Malombe in the governorship primaries.

He has alleged an attempt to deny him the ticket again hence his threat to quit the party.

“The truth is that when Wiper loses its institutional memory by losing founder members like Musila and Johnson Muthama, it badly dents the party image,” Mulyungi said.

Muthama who also quit the Wiper party in 2018 is the UDA chairman.

Mulyungi said majority of those young politicians in the party are mostly pretenders.

He said Kalonzo should work towards ensuring issues of Wiper ticket was not as acrimonious as it was in 2017. 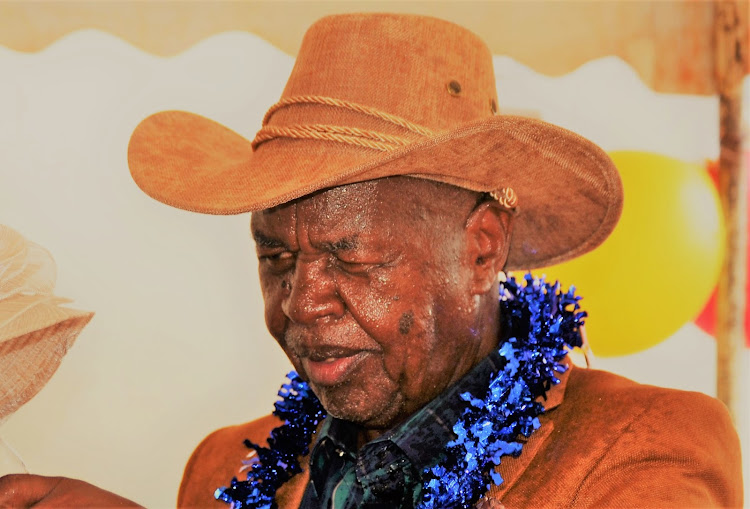 In the past Mulyungi made a number of futile attempts to dethrone Kalonzo when he was MP.

“There is need to guard against discontent and thus need for honesty leading to the issuance of Wiper tickets for the August polls.

"Musila could be privy to some unacceptable behind the scene maneuvers that would possibly see some people rigged out,” Mulyungi said.

He said in 2017 when Musila resigned from Wiper, the party ended up losing the Kitui gubernatorial seat to Governor Charity Ngilu.

Mulyungi said both Musila and Malombe shared the spoils in second and third position respectively.

However, Musila, then the Wiper national chairman said he was rigged out.

As he quit Wiper, Musila accused Kalonzo of orchestrating the release of fake nomination results.

Musila said he was unhappy that as the winner he had been declared the loser.

The former Kitui senator returned to the party towards the end of last year after clergymen brokered a truce between him and Kalonzo.

The truce came after a series of behind the scene reconciliation meetings in Nairobi.

Soon after his comeback, Musila said only the devil would make him part ways with Kalonzo again. 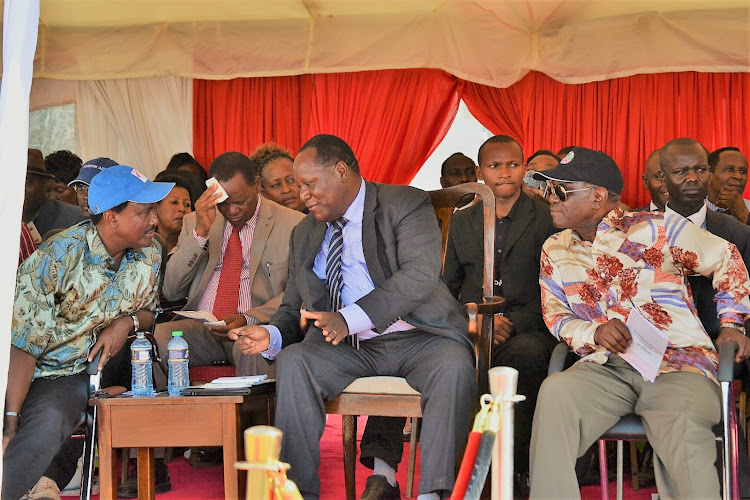 However, he threatened to ditch Wiper the second time on Saturday.

Musila spoke during the launch of his Kitui second gubernatorial bid and manifesto at a ceremony in Mwingi town’s Musila gardens.

He was given the nod by the crowd to run as an independent candidate should things fail to work right for him in Wiper.

The former Kitui senator had told the about 5,000 supporters who thronged the meeting that he was aware that some Wiper operatives were keen on denying him the Wiper ticket once again.

He said he will quit Wiper in a weeks time if his detractors appeared to succeed.

Musila threatens to run as independent in Kitui governor race

Says some members within the Wiper party ranks were frustrating his efforts to get a direct nomination.
Counties
10 months ago

H ewas in public service for 50 years and said he never was linked to graft.
Counties
1 year ago