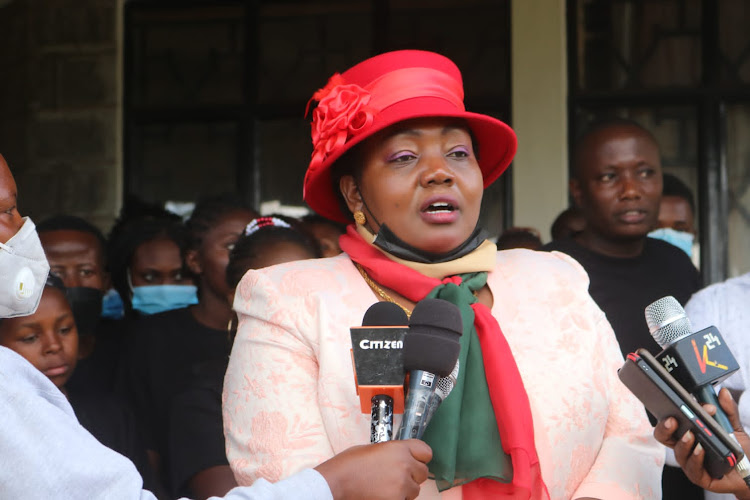 The entrance of Bucha, is likely to complicate the matrix for Dawood as he is said to have connections with those who control power in Meru.

According to political pundits and interviews with constituents, people have been pushing Bucha to vie. However, efforts to get an independent confirmation from the Housing secretary was unfruitful.

Bucha has enjoyed close ties with political heavyweights both at regional and national level. This gives him an edge in case he goes for the seat.

Bucha is said to have been Mwiraria’s great supporter and campaigner. He has also done a lot of development projects  in the area and has a lot of ground support.

Karimi, a businesswoman based in Nairobi is the daughter of former MP Silas Muriuki.

If Karimi trounces MP Dawood, she will become the first woman MP in Meru under the 2010 Constitution and the second since Independence.

Karimi is a force to reckon with, bearing in mind his father’s connections and her own networks created during her grassroots empowerment projects.

“Vote out leaders who are not keen on development. Bad roads have affected boda boda riders who have to spent all their money buying spare parts.” Karimi said during a past campaign in Giaki where she promised a fruit juice and groundnuts factory.

She said due to bad leadership, pupils are using the same desks she used during her primary school days.

"I am not in the race because I am Muriuki’s daughter but because I know our challenges of impassable roads, lack of industries, segregated bursary distribution and I know how to tackle them,” Karimi said.

Dawood has however maintained his track record speaks for itself and those campaigning against him will have the hardest time to dethrone him come August 9.

Murega told the Star his interest is to change the face of the constituency through equal distribution of resources, health, infrastructure developments and raising education standards.

Lawyer Ken Muriuki Muketha, who unsuccessfully contested in 2017, is also eyeing the seat.

Muketha, who is yet to announce his party of choice,  has put more efforts in distinguishing himself as a youth project ready to develop the constituency.

He has been holding tournaments at the grassroots level christened Kandanda Mashinani.

“If my Kandanda mashinani initiative taught me anything it is that there is so much untapped potential in North Imenti.

"That sure is a good beginning point during my tenure as your representative. I will not leave any stone unturned, and this is my solemn promise,” Muketha said on Monday.

Other aspirants in the race are Nominated MP Halima Mucheke, businessman Nimrod Bundi and Beatrice Karwitha who also vied in 2017.

Mucheke will battle it out for Deputy President William Ruto’s UDA party nominations with Munene.

It is a wait and see which party Bucha will chose to vie on in case he resigns and joins the race.