County officials believe their presence is unsightly, may give the county a bad name.

• The directive, which is being harshly enforced by county askaris, has left donkey cart operators boiling with anger.

• Wote – the county headquarters – has approximately 100 donkeys, according to water vendors who shuttle from house to house for 10-12 hours a day in 30 degrees heat. 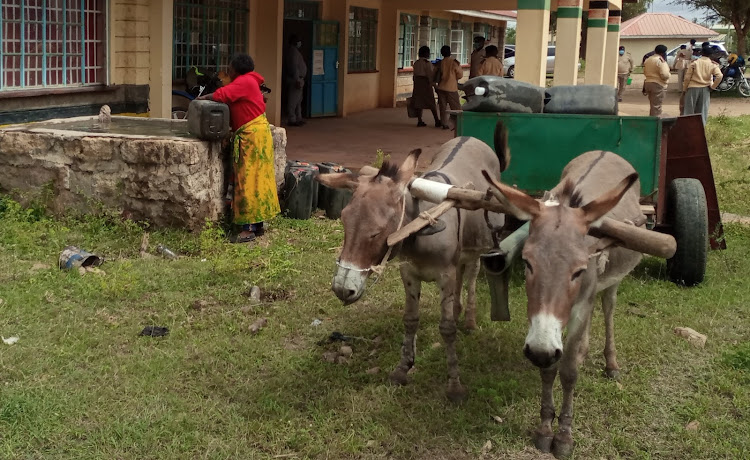 The Makueni county government has banned donkeys, mkokoteni operators and tuk tuks from Wote during the four-day devolution conference.

County officials believe the image is unsightly and may give the county a bad name.

Although the directive was made by the Kivutha Kibwana-led county government, it was announced in churches on Sunday, through notices sent by Makueni county police commander Joseph Ole Naipeyan.

The directive, which is being harshly enforced by county askaris, has left donkey cart operators angered.

“We are the only ones not benefitting from the meeting. How shall we live without any income this week,”  Cosmas Ndunda, a 40-year-old water vendor, said.

He has three donkeys and four carts which he has operated in Wote for the last 10 years.

Makueni Water executive Rosemary Maundu did not respond to queries on the directive.

Makueni is expected to showcase how it has tackled climate change including water shortage at the seventh devolution conference, which began in Wote on Tuesday.

Wote – the county headquarters – has approximately 100 donkeys, according to water vendors who shuttle from house to house for 10-12 hours a day in 30 degrees heat.

The town’s piped water system serves only a tiny portion of the 57,000 residents.

Albanus Muuo, another donkey cart operator, said they get water by digging sand at the nearby Kaiti River.

“We sell a 20-litre Jerry can at Sh20, on average, but this may vary depending on the location of the client.

“With the new directive this week, I only transport water past 10pm because there is no curfew,” he said.

Although Wote is on the cooler parts of lower eastern Kenya, the majority of its residents have had no piped water since independence.

Those served by piped water say it is not regular and some get it once a week.

The town’s two major sources of water are the Kaiti sump and the Kamunyolo dam, which can supply 1.4 million litres of water daily to the distribution system in a good season.

The rest of the county is arid and has little or no piped water.

However, the World Bank, through the Kenya Devolution Support Programme, is funding a Sh264 million sand dams and cold rooms’ project.

In October, Maundu said eight dams each with a capacity of 255,000 litres had been completed.

She said the dams would serve more than 19,200 people across the vast county with clean water for domestic use as well as for farming.

“My department has completed the construction of the sand dams within the time limits and they are ready for use,” she said.

“We have equipped each dam project with solar energy to pump water to storage tanks from which water will flow to farms and water kiosks by gravity,” the water executive said.