He harvests an average of 70 kilos per week, from 40 trees in his half-acre farm

• "Buying five fruits at a cost of Sh100, I felt there was need to take action and change the situation," Mugendi said.

• Passion fruit is among the country’s top export earners, with the government statistics of 2019 showing that the fruit contributed to about Sh1.9 billion. 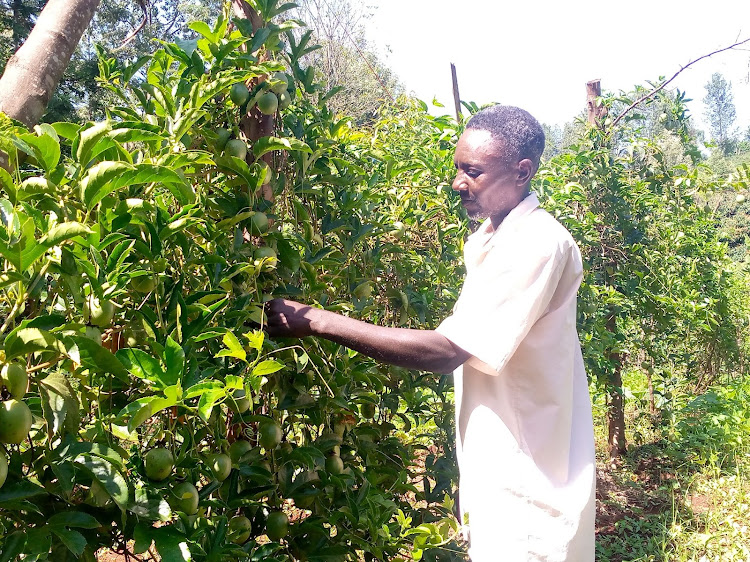 He began the venture as a solution to high cost of fruits in the nearby market where he used to buy for his child.

The father of three says he doesn't regret venturing into it and is looking forward to engaging further in the fruit farming.

Passion fruit is a perennial crop grown for its immense wealth in vitamins and minerals and does well on highlands and midlands.

It is also among the country’s top export earners, with the government statistics of 2019 showing that the fruit contributed to about Sh1.9 billion.

Mugendi says the idea of farming passion fruit came after his wife contacted him reminding him to purchase fruits for their daughter.

When he found out that a single fruit costs Sh20, he felt it was over-stretching his pocket.

"I used to buy fruits for my child at Runyenjes market but the prices kept on rising each day. Buying five fruits at Sh100, I felt there was a need to take action and change the situation," Mugendi said.

He planted two stems on his half-acre land to evade the high cost of the fruit. 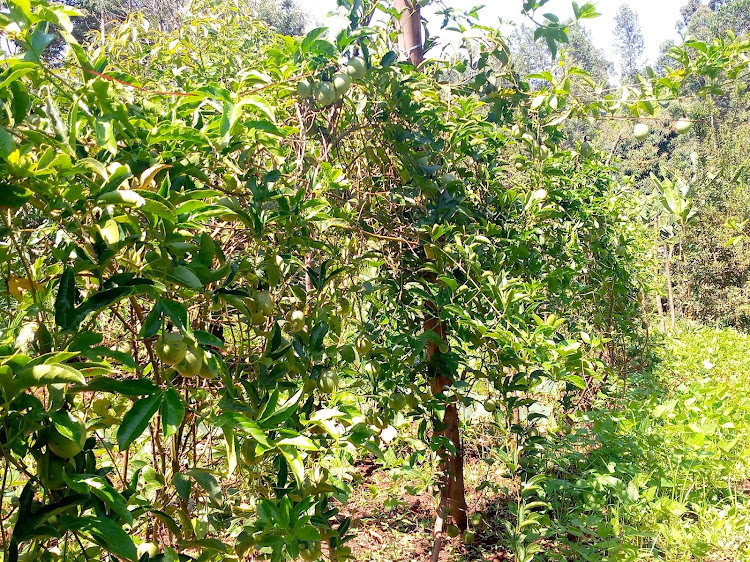 The farmer said he organically grew his two stems since he considered the health of his child.

The two stems over-yielded and he started selling the extras to neighbours.

"When it was more than my daughter could handle, I sold some to those who were struggling to find the fruits," he said.

Mugendi said the high demand called him to plant more passion fruit stems. This also came in handy with the urge of more knowledge towards farming.

The farmer who is also a mason, planted 40 stems .

"I never thought it would become that serious but I found myself spending more time on the farm training the fruits twigs and planting support poles," he added.

He said that the fruit twigs should be trained to attach on the posts and wires he has planted in his farm,for maximum yield.

Mugendi says he harvests his fruits on a one-week interval at an average of 70 kilos per harvest, earning about Sh10,000.

The Class 7 dropout, however, says lack of enough knowledge on passion fruits farming hinders him from realising his dream of becoming a top producer in the country.

“I call upon the government to intervene and send the agriculture field officers to our farms to advise farmers on the best farming practices,” he said.

Mugendi urged residents to join him in passion fruit farming as this will encourage a healthy nation because fruits are essential in human health.

Post a comment
WATCH: The latest videos from the Star
by BENJAMIN NYAGAH
Eastern
23 November 2021 - 22:00
Read The E-Paper