The operations were conducted by a multi-agency team

•The consignments had been booked at Syokimau police post under OB NO: 12/7/9/2021 as exhibits as they pursued the suspects.

•Sand harvesters at Kapa warned against consuming illicit brew, bhang, among other outlawed drugs and substance Over 100 litres of illicit brew and bhang have been seized in Mlolongo, Machakos county.

The consignment, 77 litres of chang’aa, 30 litres of kangara, 20 kilograms of bhang and 78 rolls of bhang were confiscated during a crackdown at Kapa area in Syokimau sublocation on Tuesday.

The operations were conducted by a multi-agency team. 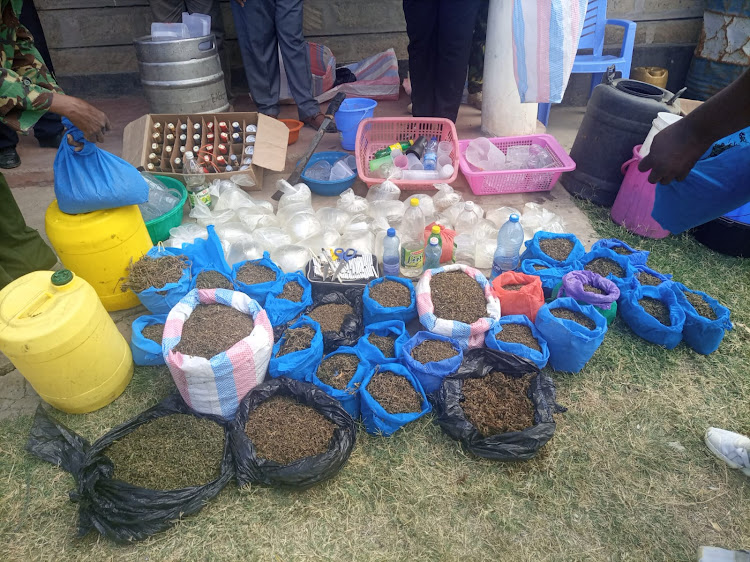 “We managed to recover the above but unfortunately made no arrests. The owners escaped after they noticed the team that was conducting the raid,” Ongaga told the Star after the crackdown.

Ongaga said the consignments had been booked at Syokimau police post under OB NO: 12/7/9/2021 as exhibits as they pursued the suspects.

He said the items will be destroyed if they fail to arrests the culprits.

“We will destroy the consignment in case our pursuit on the suspects does not bear fruits so that they don’t get back to the public again,” Ongaga said.

“It is hard to effect arrests at Kapa area due to high resistance. The best thing is the destruction of apparatus, utensils, confiscation of assorted brands of liquor, illicit brew and destroying them altogether.”

He warned that security was alert in Mlolongo and the multi-agency will continue with the crackdowns until the area is clean off illicit brew, illicit drugs, alongside other unlawful trade.

“The suspected are being traced. We warn sand harvesters at Kapa against consuming illicit brew, bhang, among other outlawed drugs and substance,” Ongaga said.

“We encourage the management to report suspects, and in general all drug and substance dealers.”