The suspects were found growing bhang in containers as flowers.

• The duo was nabbed by officers from Syokimau police station alongside area chief and Mlolongo assistant county commissioner Dennis Ongaga on Monday.

• Mlolongo Assistant County Commissioner Dennis Onganga said the  suspects were found growing bhang in containers at a home as flowers. 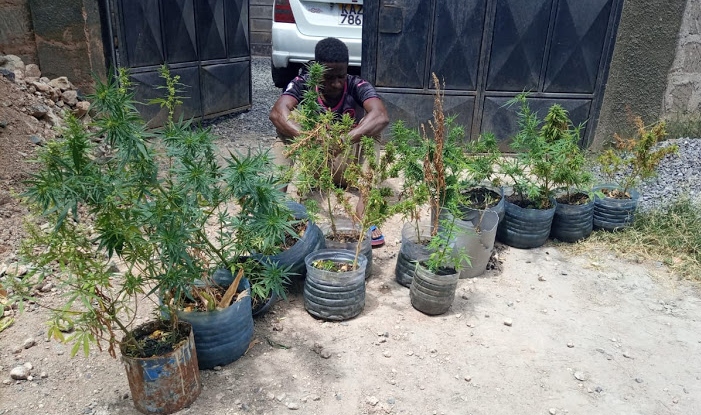 Walter Mwangale, one of the suspect's arrested for allegedly planting bhang in plastic containers at Syokimau in Machakos County on Monday, April 5, 2021.
Image: GEORGE OWITI

The duo was nabbed by officers from Syokimau police station alongside area chief and Mlolongo assistant county commissioner Dennis Ongaga on Monday.

They recovered twenty plants of bhang planted in plastic containers at one of the suspect’s parents’ home compounds.

Walter Mwangale and Eric Muhatia are suspected to have been harvesting and peddling the confiscated crops.

“Today we have conducted a crackdown on bhang in Syokimau. We confiscated twenty plants of bhang planted in plastic containers and arrested two suspects believed to be behind the illegal substance’s planting,” Ongaga said.

Ongaga spoke to the Star at his office in Mlolongo on Monday.

He said it was suspected the suspects planted the substance for commercial purposes, they are bhang peddlers in Syokimau, Mlolongo, and their environs.

Ongaga said the two had been locked up at Syokimau police station awaiting to be arraigned on Tuesday.

The administrator said the operations were conducted by the police alongside National Government Administration Officers.

He urged members of the public to volunteer information on such criminal activities within their midst to help in eliminating criminals from society.

“The public should know that schools are closed, and our children are out. We would like to plead with them to help us with information that will help us fight these drugs to protect our children’s welfare until schools are re-opened,” Onganga said.

Onganga said the home where the bhang was confiscated was inherited by one of the suspects from his parents.

He said the two-bedroom house is well secured and within a gated community and therefore it was difficult to know that such criminal activity of growing bhang was being carried out there.

Onganga said the bhang was confiscated after they were photographed as exhibits to help in prosecuting the case in court.