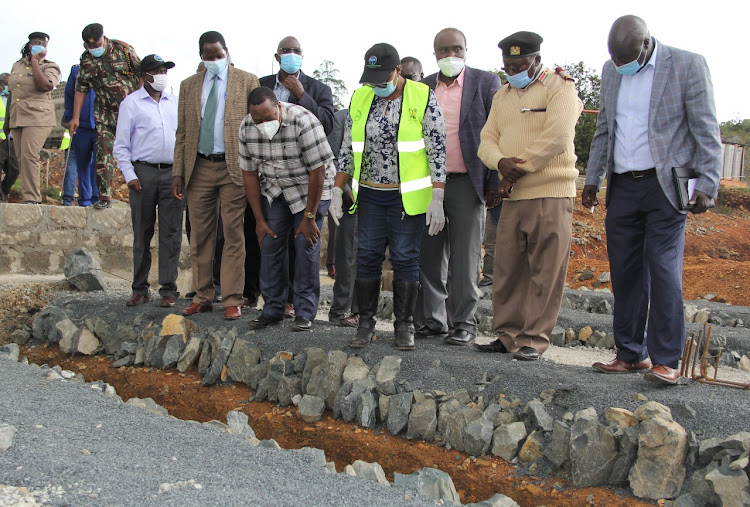 Water CS Sicily Kariuki has expressed disappointment over the delay in the implementation of two major irrigation projects in Embu county.

Both were to be completed by April 2021.

She asked the contractors to ensure they finish the projects as scheduled so farmers can start benefiting.

The CS said there should be no excuses for the delay as the government had done its part.

Sicily spoke during a tour of the projects on Tuesday.

Sicily said the Water ministry was carrying out projects worth over Sh1 billion in the county.

She said famine will become a thing of the past once the projects aimed at ensuring food security are complete.

She said drought was to blame for poor harvests in the region and that the irrigation water will boost yields.

The CS also spoke about the Building Bridges Initiative about which she said she was concerned that Embu leaders have been preaching about it while hiding.

Sicily said those spreading propaganda about the BBI have cause fear and anxiety among residents.

She said local leaders should sell the BBI because it is good and advocates for the one man one vote one shilling, a formula that will favour highly populated regions like Embu in revenue allocation.

“I hear leaders in Embu have been speaking about BBl while hiding under the table. I won’t do that here now because it's a good government project which should be supported,” Sicily said.

Embu Senator Njeru Ndwiga said the problem with the BBI is that leaders and residents have been connecting it with the 2022 succession politics.

“Just separate the document from the main leaders and you will understand it and like it,” Ndwiga said.