Ceremony pushed to August 29 because of health restrictions to contain pandemic.

• Archbishop Muheria announced the postponement in a letter to all religious men and women and the Catholic faithful of Kitui.

• Each parish will be allowed only 25 persons to attend the ceremony; but a bigger celebration will be held when Covid-19 is contained, Muheria said. 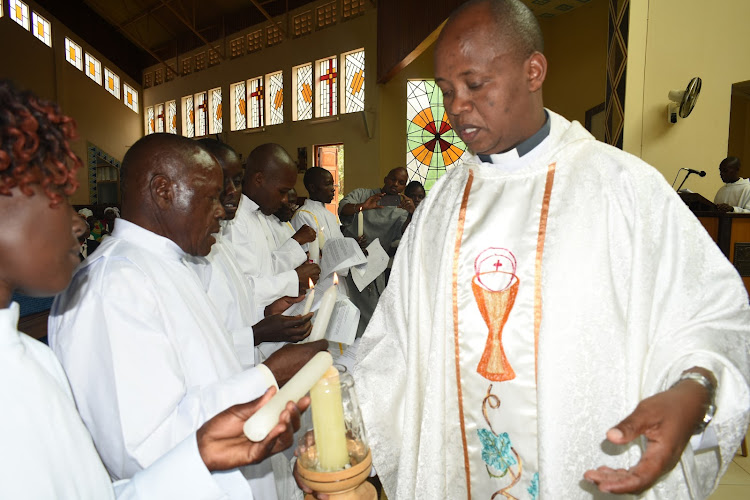 Covid-19 restrictions have caused the deferment of the consecration of the new Catholic Bishop of Kitui Joseph Mwongela scheduled for Saturday.

The ceremony has been postponed to August 29, according to a letter from the Archbishop of Nyeri Antony Muheria, who is the Kitui Diocese apostolic administrator.

The letter dated July 30 is addressed to religious men and  women as  well as all Christians of the Catholic Diocese of Kitui. Mwongela succeeds  Muheria as head of the diocese.

Muheria said delay of the installation of the bishop-elect was meant to allow at least 1,000 people to attend the ceremony.

“In view of the pronouncement by His Excellency the President and of other considerations, it has become clear that we can only hold our celebration as planned on the 8th of August with a maximum of 100 people attending,” the archbishop wrote.

Consequently, he added, after consulting with all concerned parties and Bishop-elect Mwongela it became prudent to delay the consecration for three weeks.

“We would be more assured of an attendance of about 1,000 people as planned following the social distancing arrangement,” Muheria said.

Although the archbishop noted that 1,000 persons was a meagre number for the grand coronation of Mwongela, he said it was a sacrifice that could not be avoided due to Covid-19. He lamented that the Covid-19 situation continued to worsen with numbers spiking.

“We will plan as soon as possible to hold a bigger celebration for our bishop as we usually do when circumstances allow,” he assured the Kitui Catholic faithful.

During the consecration on August 29 each parish in Kitui will only be represented by 25 persons.

The event will take place at St Charles Lwanga Secondary School grounds in the outskirts of Kitui town. Muheria said the event will be steamed live on Radio Thome FM, Facebook, Youtube and KBC Channel 1 TV.

Pope Francis appointed Father Mwongela as the fourth bishop of Kitui in March this year.

The letter of his appointment was sent to the Kenya Conference of Catholic Bishops by the Apostolic Nuncio to Kenya, Archbishop Hubertus van Megen.

Mwongela will replace Muheria who was transferred by the Pope to the Archdiocese of Nyeri on April 23, 2017.

At the time of his appointment, the bishop-elect had been the vicar general of Kitui since March 6, 2015.

Post a comment
WATCH: The latest videos from the Star
by MUSEMBI NZENGU News Correspondent
Eastern
05 August 2020 - 22:00
Read The E-Paper