• Governor says that after two patients recovered last week, residents stopped practising the measures to guard against the disease.

• The donations from the company come barely a week after 14 of their county branch staff tested positive last week. 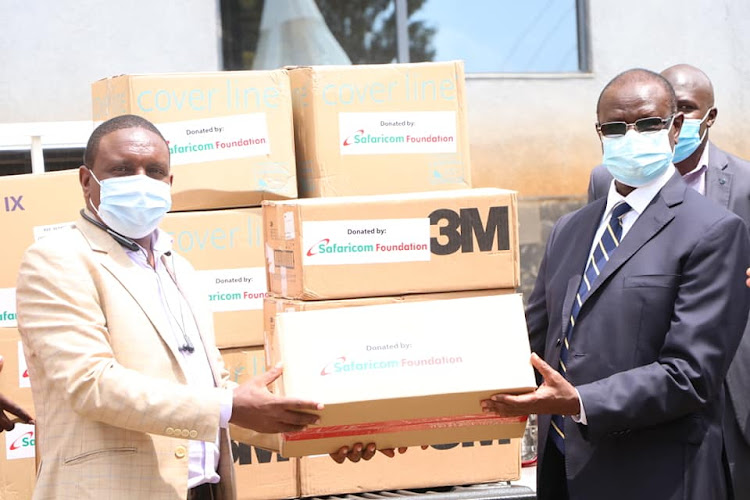 Meru Governor Kiraitu Murungi received the donation on Monday when he cautioned residents against taking for granted the directives put up by the Health ministry to guard against Covid-19.

He said to the surprise of his administration and residents last week, 13 more cases were recorded in a single day which has thrown the county into shock.

The donations come barely a week after 14 Safaricom staffers in the county tested positive for the virus.  They included seven males and six females. The company  close its customer care shop in Meru town indefinitely.

Regional boss Jackson Mutua said the gear will go a long way in helping the devolved unit which has recorded 17 cases so far to combat the deadly virus.

The telco has committed Sh6.5 billion in kind and cash as part of its contributions to the Covid-19 Emergency Fund.

“We found it necessary to go deeper and engage counties in giving protective gears because it’s expensive to maintain Covid-19-related cases,” Mutua said.

In his speech during the event, Kiraitu hailed the firm for the support.

He said his administration will set up 340-bed isolation centre in readiness to deal with cases if there is a surge.

The county chief said they have started tracing contacts of the 14 cases reported last week to curb the spread of the respiratory disease. He maintained that they are prepared to tackle the disease, which is expected to spike in August, adding that concerted efforts will ensure the country beats the virus.

“I want to thank Safaricom for the support now and before. It will go a long way to support nurses, doctors and hospital staff in taking care of all cases in our hospitals. The fight is big and we’re fighting it together,” Kiraitu said at the county headquarters on Monday.