• Rock catchment constructed more than 20 years ago by an NGO.

• Borehole drilled by Ministry of Water, county government has since rehabilitated the borehole and put up two water kiosks. 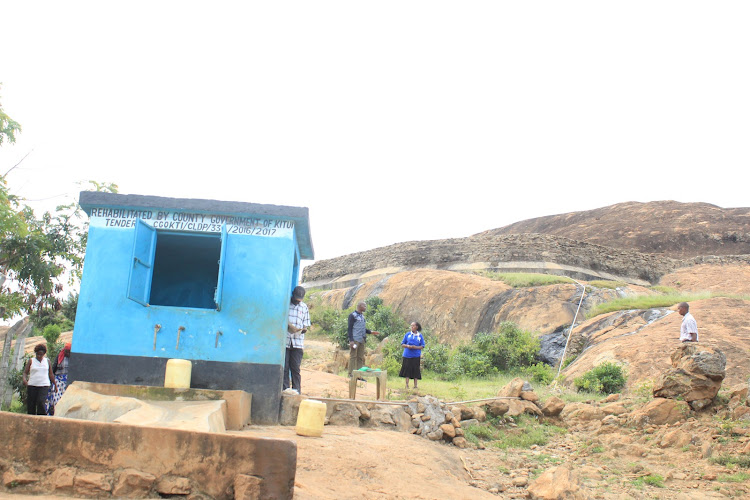 The construction of water kiosks and rehabilitation of a borehole at Thokoa have come as big relief to residents of the Mwingi West village who can now fetch water without the risk of drowning.

Initially, residents had to take the risk of fetching water from the rock catchment and many slipped and drowned.

At least seven people died in the last five years.

But the risk has now been eliminated with a borehole drilled at Thokoa market to supply water to residents. The borehole was drilled by the Ministry of Water. The county government has since rehabilitated the borehole and put up two water kiosks at Kwa Gideon Centre and Singia.

Katwii Kyathi, the woman in charge of the water kiosk at Singia, said the construction of the borehole was a big relief to residents.

She said fetching water from the water catchment was a dreaded undertaking that instilled fear in many. The rock was constructed more than 20 years ago by an NGO.

Katwii sells water and each household is expected to pay Sh50 per month.

“I have managed to pay fees for my children with the money I make from selling water,” Katwii said.

She was happy the kiosks have eliminated the risk of drowning because people no longer have to navigate the rock to fetch water.

“Water may seem to be enough now during the rainy season but during dry seasons, the borehole at Thokoa will not sustain the three water points so the county government should drill more earth dams for water backups,” Munyoki said.

Tabitha Munyasya said the kiosks had answered the prayers for clean drinking water.

She said the generator that pumps water should be changed for efficiency because it has been in use for a long time.

“The generator is too old and has been subjected to a lot of repairs. We wish a new one could be purchased in order to pump water faster,” Tabitha said.

Project chairman Geoffrey Nduva said the generator has been consuming a lot of their savings due to repairs.

“We urge the county government to look for an alternative source of power supply such as solar panels which will be effective in water pumping to all areas,” Nduva said.

Kyome/Thaana MCA Alex Wambua who toured the project lauded the county government for the safe water points for residents.

He said the county assembly had approved several water projects such as Ngomeni earth dam within the village, which might be done in the next financial year.

Subcounty water officer Phillip Mutaki said the borehole may sustain the residents for just another three years due to the adverse effects of climate change.

“Alternative sources of water such as the construction of earth dams need to be sought for a continued supply,” he said.