• Kibunjia said the national government, through the Sports, Art and Social Developments Funds, is committed to promoting, preserving and embracing cultural memories in the counties. 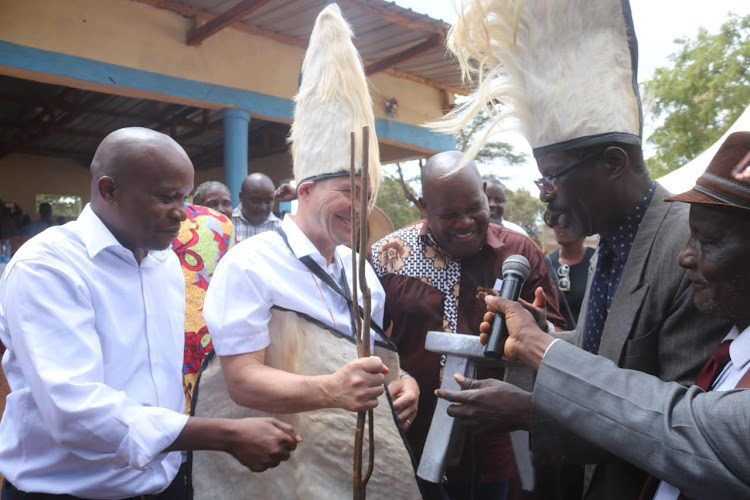 The Njuri Ncheke Council of Elders has now accepted to have the Meru town museum moved to their shrine in Nchiru, Tigania West.

They had previously rejected the proposal by the Meru government. They said they were not ready to “live with animals”. The elders added that the shrine had served as their headquarters for ages and moving the facility there would deprive them of their land.

However, the county government and the National Museums of Kenya pledged to build a Sh50 million cultural heritage centre at the shrine. This prompted a change of tune within the council.

On Tuesday, council chairperson Linus Kathera and secretary-general  Josphat Murangiri said opposition to the planned relocation was ill-advised and misleading.

Kathera said those against the project were members of a splinter group and their voices must not be misconstrued as that of the council. They accused the faction of causing endless feuds and promised to support the relocation.

They spoke at the county headquarters where Governor Kiraitu Murungi and National Museums of Kenya director Mzalendo Kibunjia signed an MoU to initiate the construction of the centre.

The centre is meant to preserve, entrench and enrich the Ameru traditions and culture and act as an educational centre for residents and people from farther afield. It will also be a source of revenue.

The Youth, Gender and Sports department, led by Koome Miriti, will facilitate the construction and provide initial funds.

Kiraitu called for concerted efforts to ensure the dream is realised. He urged the Njuri Ncheke Council to participate in building the centre, appealing to each of the more than 50,000 members to donate an iron sheet or a building stone so they can own the facility and ensure the Ameru culture is protected for posterity.

“The centre is estimated to cost Sh50 million. The county has set aside Sh15 million this year. We’ll allocate another Sh15 million next year... It will generate revenue. We would want people to tour Meru and see Koome Njue and Kaura O Bechau footsteps in the leadership of the Ameru people,” the county chief said.

Kibunjia said the national government, through the Sports, Art and Social Developments Funds, is committed to promoting, preserving and embracing cultural memories in the counties.

“[The role of the] Museums of Kenya is to Keep memories of the nation to collectively remember what happened 10 years ago. Most devolved units lack the most relevant skills and we are to help develop them,” he said.

“Anyone who doesn’t have a culture is a slave. Counties must embrace and promote culture. I pledge my 100 per cent support — no turning back to cultural conservation.”

As part of the agency’s efforts to boost tourism, Kibunjia said they have begun mapping out tourists-attraction and cultural sites. Meru was just the beginning, he said.

“Culture is not only a community’s pride but also a money-spinner. People go to Israel to see their culture. We want to make it unique,” Kibunjia said.

He went on, “Njuri was a government and it sent delegates to the Lancaster House, but that history is eroding among the young generation because there is nothing to show and prove.”